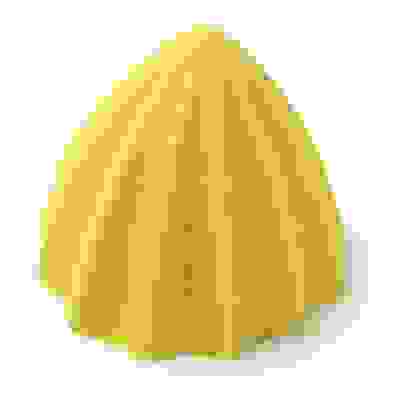 It foams up really well, and feels moisturizing on my skin... The scent is amazing, very citrusy and sweet. Definitely makes my showers and mornings a little bit more fun (great for Mondays!)

Shower-powered rocket
3.8 out of 5 Customer Rating
24 Reviews
Item No. 08559
Vegan
Naked
Blast off with this bright yellow shower bomb. Hold the buttercup-colored fizzer under the stream and watch it transform into a cloud of cleansing foam that you can scrub all over for maximum olfactory delight. Shake off the last traces of tiredness with the a citrus-and-herbal blend of lemon myrtle, petitgrain and neroli oils, while ground white rice offers just a touch of gentle exfoliation. This is your final boarding call for post-sleep perkiness.
See how to use

Not Sleepy
Ingredients How to Use
Ship to home

It foams up really well, and feels moisturizing on my skin... The scent is amazing, very citrusy and sweet. Definitely makes my showers and mornings a little bit more fun (great for Mondays!)

Run your shower and hold your shower bomb under the flow. As it expands, scoop up the foam and cleanse your skin.

Not as described, needs work

Lush has perfected the bath bomb. The shower bomb? Not so much. The smell was awesome when it was dry. I expected the smell to be just as fragrant in the shower - not so. I had to put the bomb right in my face to smell it. I was anticipating endless "foam" as I used it in the shower. A small amount of foam was created once i ran it under the water. I scooped up the foam from the bomb, which was a little gritty (a nice exfoliant) and about a palm-sized amount, and used it on my skin. Then there was no more foam until I put the bomb under the water again. It was a tedious process. There was more foam than I needed for one shower, but not enough for two showers. I just put it on my floor and let it dissolve away... I'm so glad I didn't actually use this in the morning to wake myself up - I would have been so annoyed and disappointed (I'm not a morning person to begin with). I don't feel I got the experience that was mentioned in the description.. go back to the drawing board, Lush. Definitely won't repurchase. Caution - shower floor was slippery after use.

this is so fun to use, smells delicious, and is perfect for someone who doesn't like taking baths
Yes, I would recommend to a friend

At first, I was a bit nervous to use this product because I knew for certain that I wanted to get the most bang for my buck. In turn, I cut the shower bomb into three pieces, and was able to use each piece for at least one shower. I utilized this shower bomb on those tired mornings especially before work after returning to work from maternity leave. The smell is delightful- a real wake up scent. The gentle exfoliation and fun, yellow foam are perfect for me. It's a fast, fun self care routine that I find to be perfect for a new mom.
Yes, I would recommend to a friend

Not what I expected

First, the positives: it had a lovely, lemony smell before I used it. Also, my skin felt somewhat moisturized after my shower. That being said, this was not what I expected. The bomb did not foam at all or even produce suds. When water hit it, it disintegrated into a crumbly mess, which I could barely use. I tried to use it as a soap, thinking I might be able to get a lather going, but that was impossible. It was so gritty, it actually hurt my skin. As other reviewers mentioned, there was no scent at all in the shower. I am so disappointed! I was so looking forward to this special treat. I also bought the pink shower bomb which I have no desire to use now. :(

Would not recommend this. It smelled great before it was used. Then when the water hit it, it basically lost the smell. It did however make the floor very slippery and I felt like if I moved, I would immediately fall. Was not worth it at all. Didn't get the smell on me, didn't make the bathroom smell at all. It just changed the water color and made the floor dangerous.

Reading the comments may mislead you, this product is cleansing, rejuvenating, and the delightful lemon skin stays on your skin all day. You do not have to use it in one use! I spread mine out over a couple of washes switching between that and a Lush soap bar, and got four to five uses.
Yes, I would recommend to a friend

Tried this product for the first time. It was ok! I loved the scent but I felt like it was really messy and I would have just preferred to use a scrub instead.

This shower bomb is great. Smells good, skin feels smooth after shower. Only complaint would be the size. It's to big, I felt like i was wasting what I had left after cleaning everywhere twice.
Yes, I would recommend to a friend

I ordered this as part of my first Lush haul ever. I was pretty excited about this shower bomb in particular. It smells AMAZING...until the water hits it. I feel like the smell no longer existed and to be honest my shower was very underwhelming. No wake me up or feeling like I even left the shower smelling amazing. Probably won't try this product again.
Displaying Reviews Back to Top
« Previous | Next »
Keep me updated