Being Native American in Covid-19

Forgotten in the Pandemic.

The Covid-19 pandemic is real and its effects will be long lasting; leaving no community, no family, no individual untouched by its impact.

We’re often told that we’re all in this together—but our experience of Covid-19 is not the same.

The stark evidence of inequalities that exist within our system has never been clearer. Communities made vulnerable by systemic failures and discrimination face higher barriers and challenges to accessing healthcare and essential services. If there was ever a moment to pause, listen and demand justice and dignity for all, it’s now.

Being Native American in Covid-19: Forgotten in the pandemic

The violent history of colonization and the resulting systemic racism across the U.S. has resulted in long-standing issues in Native American communities. In urban centers like Seattle, Los Angeles and New York, Native Americans have been facing challenges accessing food, shelter and healthcare. Now the virus is tearing through our tribal communities, such as the Navajo Nation. If the Navajo Nation was a state, it would be ranked third for the highest infection rates, behind New York and New Jersey. While the rest of the United States has cycled through economic booms and busts over the past centuries, systemic and historic inequality has locked citizens of the 573+ Native American tribes in the U.S. in a perpetual bust that damages our health and wellbeing.

The CARES Act allocated $8 billion among federally recognized tribes which was too little, too late weeks ago. More than a month elapsed since the bill was passed and so far none of the tribes have seen a cent of the scandalously-delayed relief package.

This criminal delay in getting aid to tribes puts entire communities at risk of being wiped out. In the meantime, Native Americans are being left out of the data count on positive cases—being labeled as “other,” contributing to an incomplete picture of the virus’s full impact. As the Navajo Nation, the hardest hit among tribes by the outbreak reached nearly 88 deaths and over 2,876 confirmed cases. It feels like we have been forgotten by our own government.

Despite the best efforts of tribal leaders, the circumstances in which Native American communities exist were precarious well before Covid-19 hit. In violation of old treaties, the U.S. government has failed to provide funding for housing or basic infrastructure, creating the perfect storm for Native Americans to be one of the most at-risk populations for Covid-19. The poverty rate of Native Americans is nearly double that of all Americans, at almost 30%, and Coronavirus will make this gap even starker. Many Native Americans lack resources that the vast majority of Americans take for granted––for example, Native Americans are 19 times more likely to lack indoor plumbing than white Americans. This shortfall makes basic safety practices like regular handwashing and staying hydrated a significant burden for the two million Americans who must trek anywhere from three to 25 miles away to access a water pump.

When systems fail, Native Americans are hurt the hardest. Yet, across centuries of colonization, resilience has become a way of life for us. We must be fairly represented in relief efforts and stimulus packages to make sure Indian Health Service, tribes and Native-organizations have the resources they need to provide adequate care.

A Covid-19 testing site opened at the Chief Seattle Club in partnership with the Seattle Indian Health Board. 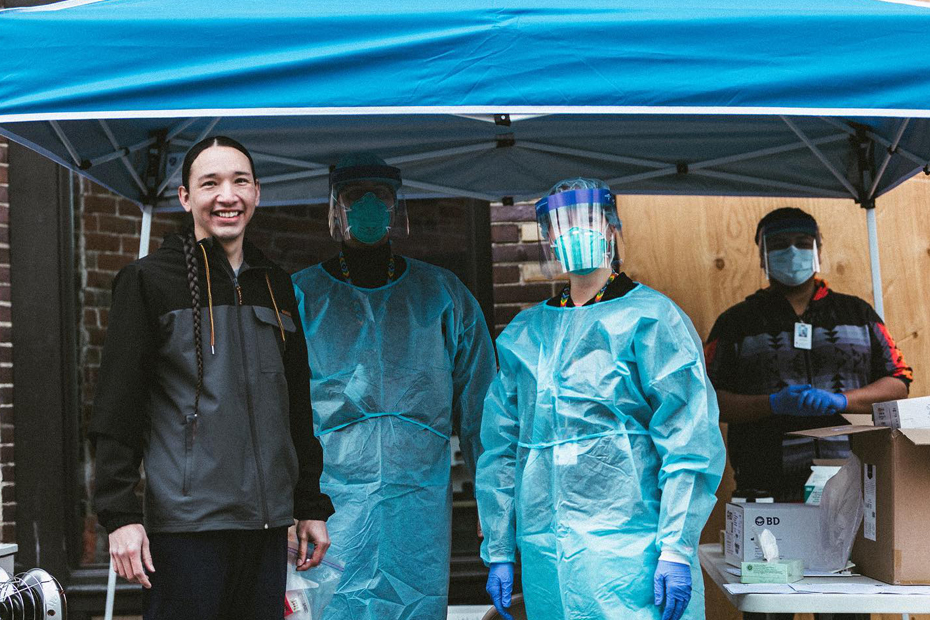 500 years ago, a virus arrived on the shores of the U.S.—the colonization. That virus—the colonizer virus—has violently caused separation, division, exploitation and harm to people and the planet, resulting in “the haves and the have nots” and a lack of connection and interdependence among people.

Reparations are due. For the boarding schools that ripped Native American families apart and stamped out the surviving culture under the motto of “Kill the Indian, Save the Man.” For the Native Americans’ unemployment rates that are 10 times the national average and how four out of five Native women are directly impacted by violence and exploitation. For the images in the media that criminalize people of color and the lack of police accountability for the unarmed killing of Native and Black men and women.

We come from generations of resilient people who practice reciprocity. I founded the Decolonizing Wealth Project, aiming to collectively move us all from disparities to equity through a philanthropic initiative designed to practice the values of reciprocity. We promote a world vision in which everyone can live our best lives, thrive in our cultures and bring about healing from generations of colonial trauma. In response to the pandemic, we launched the Native American Community Response Fund to provide emergency support for the most vulnerable Native American families and communities impacted by Covid-19. The fund has collected over $600,000 from over 800 donors and continues to gain support. We’ve provided grants to protect our sacred elders, support youth programming, to provide food and water, shelter, rent relief, medical care and PPE. In these difficult moments, we lean on each other. At a time of crisis with a global pandemic, we rise up to protect our elders and the most vulnerable in our Native communities.

We need to transform renewed awareness into meaningful action that tackles the crisis at hand while planning for the future. Out of this crisis, we have a responsibility to heal centuries of harm by directing resources to Native communities. This is about solidarity, not charity.

This article is part of a series on Covid-19 in communities disproportionately impacted by the pandemic. Explore the rest of the stories here.