This is a guest-authored piece written by Montréal en Action —a Charity Pot partner working to eliminate systemic racism and discrimination in the city of Montréal.

The city of Montréal is often considered a bastion of both progressivism and arts and culture at the intersection of Europe and North America. And yet our city isn’t immune to forms of systemic racism and discrimination—that is, forms of exclusion that are baked into our laws, practices and processes. In Montréal, Black and Indigenous people are four to five times more likely to get stopped by the police than white residents. People with traditional French Québécois last names are 64 percent more likely to be called back for a job interview than people with racialized last names, despite identical resumes.

In 2018, we made history by gathering 22,000 signatures from Montréalers to force a Public Consultation on Systemic Racism and Discrimination. Why 22,000 signatures? In 2017, while reading the Montréal Charter as a McGill University law student, our founder Balarama Holness, discovered the “right of initiative”. Meant to promote direct democracy and civic participation, it guarantees any group that collects more than fifteen thousand handwritten signatures around an issue the right to a public city-funded consultation on the topic. Though the signature process has since gone digital, the right of initiative remains an important part of our city’s founding laws and a key lever of participatory democracy.

Opening a public debate on how the city was perpetuating racism and discrimination was not at the top of City Hall’s priorities, to say the least. But the law is the law. So, over the course of one year, the city mandated an independent body to orchestrate a consultation that would reach 6,000 Montréalers and would result in the submissions of countless memos and studies by PhDs, academics, community organizations, human rights groups and individuals—all of which are publicly archived. That one line in the Charter defined the course of our organization and made history in our city.

We’re the first organization in North America to compel a public consultation on racism and discrimination at the municipal level. For that reason, we are committed to bringing social justice and empowerment to racialized and marginalized communities. We fight for recognition, representation and redistribution. 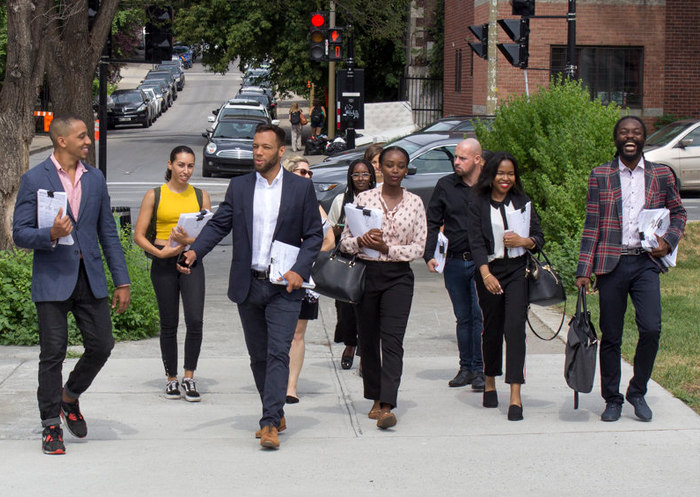 In June 2020, at the height of the George Floyd and Breonna Taylor protests, results of the consultation were made public: 38 recommendations to the city of Montréal for fighting systemic racism and discrimination. Those 38 recommendations, which encapsulate and represent the countless hours and stories that were shared in the consultation, serve as our guiding compass. Too many governments publish reports full of rich recommendations that simply gather dust on a city shelf. Not on our watch!

Since the release of the recommendations in June of this year, we’re working to track the city’s progress in implementing the recommendations and to exert pressure on the city to act through our thematic advocacy action groups. We’re also helping to raise awareness through online campaigns and our open access educational program. To date, our educational webinars have engaged 87 organizations and 1,500 participants. On the advocacy front, we are finalizing the incubation of our advocacy action group on arts and culture, which is planning a series of campaigns for 2021 with Montréal cultural organizations.

Our group of 30+ volunteer advocates and activists are building a multiracial, intergenerational coalition of Montréalers who will flex the democratic muscle to ensure that our city is equitable and its people are free.

To learn more about Montréal en Action and how you can support their work, visit their website or follow them on Instagram. You can also support other community-based groups like Montréal en Action by purchasing our Charity Pot Body Lotion. 100 percent of the purchase price (minus taxes) goes directly to small, grassroots organizations around the world.