One of the oldest haircare practices.

We’ve all seen a braid. Three strands woven together that create visual depth and a pattern.

It is possible for every hair type to form a braid. However, the level in which a braid can maintain its shape varies greatly from each hair type. There is a uniqueness to how Afro-textured hair, specifically, holds braid patterns. Whereas some hair textures require gels, mousse or bands, the Afro-textured hair can take to a braided pattern with little aid.

The practice of braiding has a deep cultural significance in African cultures, it is also one of the oldest haircare practices for those with Afro-textured hair.

For context, the Himba tribe located in Namibia is a tribe of 50,000 people that still exists as a nomadic, pastoral tribe. The women of this tribe braid their hair in a unique way using a red clay made from the earth. This unique practice of using clay protects the naturally delicate Afro-texture strands from becoming quickly brittle under the heat of the sun and the dry air. This tribe has hairstyles for many stages in the women’s life from childhood to marriage. The tribe also gives boys many hairstyles, specifically a single braid during their childhood.

We see further documentation from other tribes cited from Byrd and Tharps, “Hair Story: Untangling the Roots of Black Hair in America”. In the 15 century, French explorer Jean Barbot wrote, “The Qua-Qua…wear long locs of hair, plaited and twisted, which daub with palm oil and red earth.” In this particular tribe, “This hair is the hair of their wives, which they cut off and tie it this way, end to end and fix it on their heads.”

The meaning and usage of braids before the Transatlantic slave trade has intensely and dramatically shifted the relationship people with Afro-textured hair have.

During slavery in the United States, according to Byrd and Tharps, “Slave owners wanted maximum output from each slave, often choosing to over work them to death in a matter of years….The slaves were expected to work in the fields under a grueling sun for twelve to fifteen hours a day seven days a week.” These working conditions gave the South their economy of cotton. In order to produce a similar amount of wealth, these were the hours required to uphold the lifestyle that southern plantation owners lived.

Braids, cornrows and locs are some of the oldest haircare practices. Artwork by Lauren Brevner. 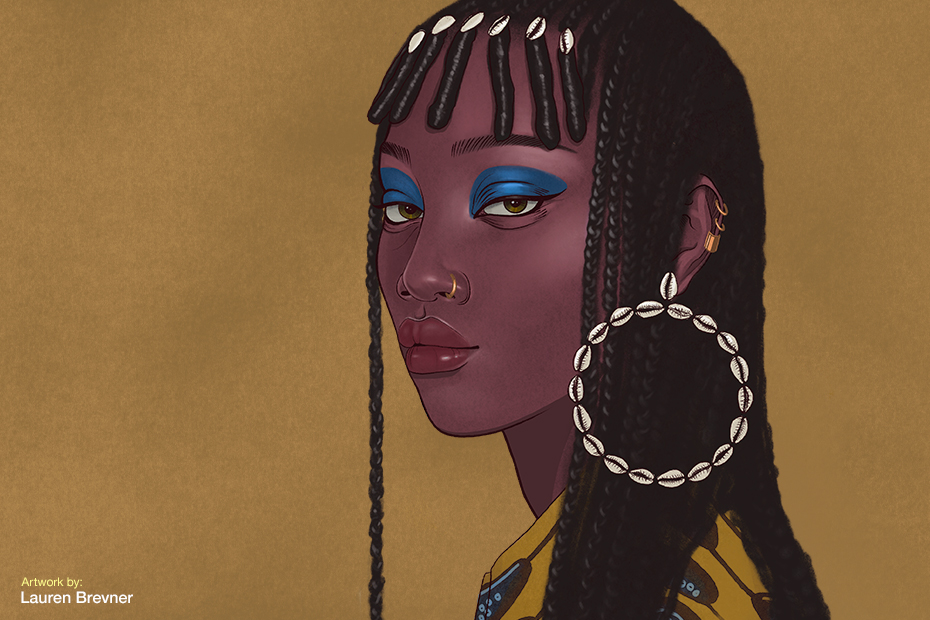 “The hairdresser was often considered the most trustworthy individual in society….The process could last several hours, sometimes several days.”

Another tradition that still carries in the Black community today, where getting our hair braided is a long ritual in order to ensure its health. With twelve to fifteen hours of slave labor, it’s easy to imagine how little time enslaved Blacks had in order to prioritize the health of the hair. Furthermore, Byrd and Tharpe explain, “The slaves who worked inside the plantation houses were required to present a neat and tidy appearance or risk the wrath of the master, so men and women often wore tight braids, plaits and cornrows.”

This is when the meaning and significance of braids have been cloven in two. An expression of unity and belonging to a desperation of survival for both their lives and their hair.

In our society, braids are understood as a sense of style but this is often misconstrued as a sole fashion statement with Afro-textured hair. People with Afro-texture hair require braids for the health of their hair but due to its natural ability to shift shape, it transforms visually and socially as a style.

It’s in this where the social arguments of braids and its history and culture start. As all hair can be braided but not all hair needs braids. So as a result, people with Afro-textured hair get the benefit of both. The ability to explore a lost history of culture as well as keeping its health. It is an extension of our overall care for the self. According to Sylvia Ardyn Boone, an anthropologist specializing in the Mende culture of Sierra Leone, “In Nigeria, if a woman left her hair undone, it was a signal that something was wrong. The woman was either bereaved [or] depressed.”

Braiding is first and foremost a utilitarian practice. It holds moisture within the strands. It protects it from frigid temperatures or hot temperatures that results in the breakage of the hair. Akin to a plant, the Afro-textured must be regularly tended to. Afro-textured hair with braids should be remembered by its ancestral practice of style and community and as a symbol of how we honor our hair with love and high regard.

Afro-textured hair deserves to thrive in its natural integrity and shouldn’t prohibit one from advancing from a workplace or present a series of questions based on their intellect or capability. Unfortunately, many people still go to work or school with the fear that they could be fired or be sent home because of how they’ve chosen to wear their hair. This includes natural or protective hairstyles such as braids, locs, twists or bantu knots.

Jasmine Gayle is a freelance writer with a Bachelor's Degree in Writing from Ithaca College who covers mental health, education and issues impacting the Black community. She's passionate about engaging in critical sociopolitical discourses.