A symbol of honor and a sacred relationship with the self.

They had many names before we called them head wraps.

From ‘idukus’ in isiZulu, ‘duku’ in Chichewa, to ‘gele’ in Yoruba. Head wraps have an important meaning in the Subsaharan African cultures. It’s also common in Indian cultures and is named as Turban. We see many head wraps in modern religions, high fashion and in casual wear amongst the Black community. But what does this cloth around the head mean and how did we as a collective get so disconnected from its history? In this series, we will journey through the many parts and facets of Black hair and its significance.

It all starts with knowing the culture and its history. In every culture, there are many modes of communication. The way we say hello has meaning, the way we enter a home, to how we eat our food. But the Afro-textured hair still carries many questions from those who do not possess it. According to ‘Hair Story: Untangling The Roots of Black Hair In America’ by Ayana Byrd and Lori L. Tharps, in African culture, “The hair’s value and worth were heightened by its spiritual qualities.”

As described by Mohamed Mdoj, a professor from Columbia University with Senegalese roots, “The hair is the most elevated point of your body, which means, it is the closest to the divine.” African cultures infused their sense of spirituality and harmony from nature with the practices of their hair.

The head wrap was shown as a symbol of class, wealth, and relationship status. A silent communicator to the way Black people positioned themselves socially to their community. It was also common to adorn these head wraps with jewels as a form of personal expression. A practice, in this digital and tech age, that still prevails without thinking. We do this from the glasses we wear, to the jackets we buy, to the shoes we put on our feet.

Afro-textured hair is the most delicate of all hair types. Requiring regular or daily moisture and gentle hands, it is visually, the tightest of all curl types. Its fragility requires a high-level of maintenance which will be later described. It is soft. It is malleable. It is transformative akin to cotton’s weaving into other fabrics.

In its natural disposition of needing a specific tailored care, it’s common to protect it from the elements. Spending hours doing our hair is not one out of luxury or excessive self-pampering, but one mandatory for its strength, growth and overall health. This versatility extends to braids, Afros, twists, locs and many other forms or styles that maintain the natural integrity of the hair.

A practice that was forcibly removed during slavery in the U.S., taking care of our hair and expressing the multi-dimension, became illegal when Tignon laws were enacted in New Orleans. “The Tignon laws enacted by Governor Don Estevean Miro of New Orleans in 1786 “prohibited Creole women of color from displaying ‘excessive attention to dress’ in the streets of New Orleans” (McNeil, 2004). But what is “excessive attention to dress”? And how did this have any effect on the public in New Orleans or other cultures during this time?

Head wraps were a symbol of honor and a sacred relationship with the self. Artwork by Lauren Brevner. 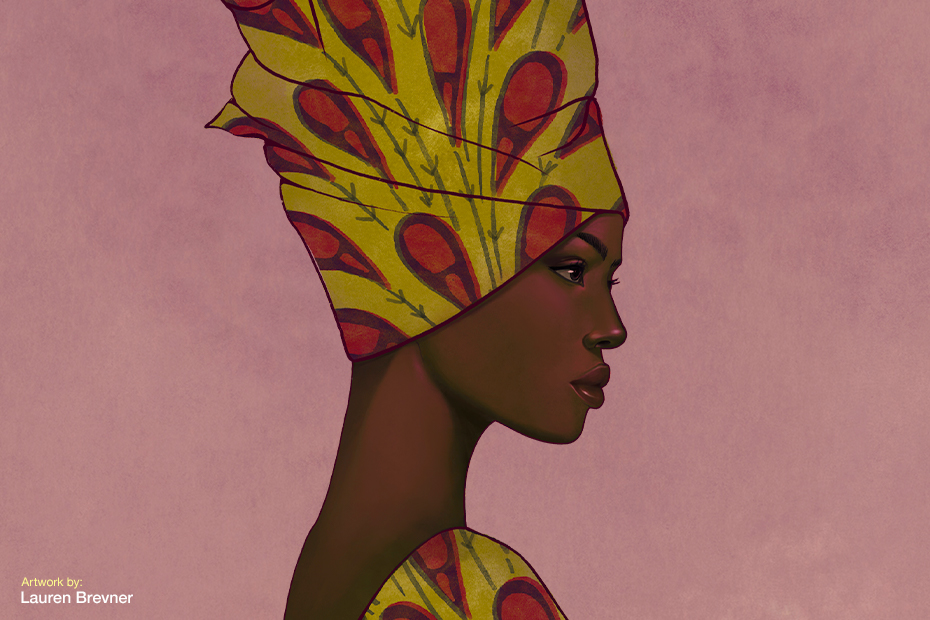 The method behind this was a tool for white people to distinguish which enslaved Black was free and who was not. As wearing head wraps in the United States was a visual representation of which humans with dark skin were allowed to do something as simple as wear their hair and who could not.

According to Byrd and Tharps, “When ringworm occurred, slaves commonly tired a rag around their head to cover the unsightly scabs left by the affliction, and a worse infection would then ensue, creating a vicious cycle of hair problems, breakage and patchy baldness.”

A symbol of honor and sacred relationship with the self was then flipped to a marker of being subhuman. This is an important marker of so many present-day questions. Why do Black women wear weaves? Why do they wear extensions? Their assimilation to the new world was dependent on their survival and all culture from their previous lives was no longer allowed. This marked the breakdown of language surrounding Afro-textured hair during slavery in the U.S.

This historical ritual of suppressing the hair has created a traumatic rupture in Black communities and its complicated nuances. Head wraps became a way to conceal the unkempt hair while enslaved Black people picked cotton, performed housework for their slave masters and worked 12- hour work days. Since Black humans were viewed as subhumans, the many ways of their previous culture became lost in a dark way of survival.

But through the strength to connect back to something so deeply ingrained in our history, the head wrap has persevered through history. Black Americans, the descendants of enslaved West Africans, still casually wear head wraps in many ways. Sometimes before bed to preserve moisture or for everyday casual wear as a way to reclaim a connection to a previous culture.

Afro-textured hair deserves to thrive in its natural integrity and shouldn’t prohibit one from advancing from a workplace or present a series of questions based on their intellect or capability. Unfortunately, many people still go to work or school with the fear that they could be fired or be sent home because of how they’ve chosen to wear their hair. This includes natural or protective hairstyles such as braids, locs, twists or bantu knots.

Jasmine Gayle is a freelance writer with a Bachelors's Degree in Writing from Ithaca College who covers mental health, education and issues impacting the Black community. She's passionate about engaging in critical sociopolitical discourses.