Rooted in Black History: The Afro

A political statement of Black power

The Afro was the first culturally significant way that people with Afro-textured hair started to resist the thought process that altering our hair was necessary for survival.

The Afro-textured hair has undergone an entourage of negative notions. It was described as unruly, woolly and this birthed the idea of “good” and “bad” hair. When fairer skin and straighter hair became the standards for beauty in the United States, it placed a pressure on Black women and people with Afro-textured hair to assimilate their hair.

Amongst Black women, a chemical relaxer product came out to chemically alter their natural hair. This has since created a permanent look akin to women who have straighter hair. According to authors Ayana Byrd and Lori Tharps’ research, “Within the Black community, straight hair was not the preferred look but a marker of one’s position in society. Light skin and straight hair still represented wealth, education and access to echelons of society.”

This mentality of measuring hair through the curliness of the texture is what led to a deeper mental and emotional wound. The kinkier, the more dreadful. The curlier, the less professional. From this moment in history, a pursuit of constantly running away from “blackness” or being identified anywhere close to the Negro. Black women would sometimes endure harsh chemical burns on their scalps to alter their hair after relaxers to make the hair more manageable and more appealing to their white friends and colleagues.

Hair Story: Untangling the Roots of Black Hair in America's authors, Tharps and Byrd, point out that in the 1900s, a Black newspaper called The Oklahoma Eagle declared, "Amazing Progress of Colored Race-Improved Appearance Responsible." The appearance, including the hair, was the means to a socioeconomic end. “African-American people who felt that they were lucky to get any kind of professional job, understood and believed that to be a cookie cutter as best they could of white America would at least present an opportunity”, explains Harriette Cole, editor at Essence Magazine during that time.

This excerpt showed that there was a deep belief amongst some Black folks that the entry to financial wealth and social acceptance doesn’t come from merit or work ethic but the approval of whites. By the early 1900s, straight hair had become the preferred look to signal middle class status. The practice of straightening the hair, however, was a highly contested issue within the Black community. Everyone had an opinion, including members of the Black elite, politicians, ministers and intellectuals.

It should be noted that it was a cultural thing to straighten and style the hair for both Black and white women alike. The pressure for Black women was high with their hair so characteristically different from straight hair and the pressure was more obvious. The opinions of “good” and “bad” hair started to emerge, and this has deeply affected the way Black women, to this day, wear their hair.

With the pressure to gain access to wealth and fit into society, straightening your hair was unconsciously understood as a socially acceptable requirement; since Afro-textured hair was still seen as unruly, unprofessional and unkempt. This leads into why Black women would chemically relax their hair and why Black women would wear wigs and weaves.

Wigs and weaves presently are more of a protective style choice versus an indicator of whether a Black woman loves her hair. However, the stigma, debate and opinions continue around Black women and the state of their hair.

The Afro emerged as a political statement of Black power. Artwork by Lauren Brevner. 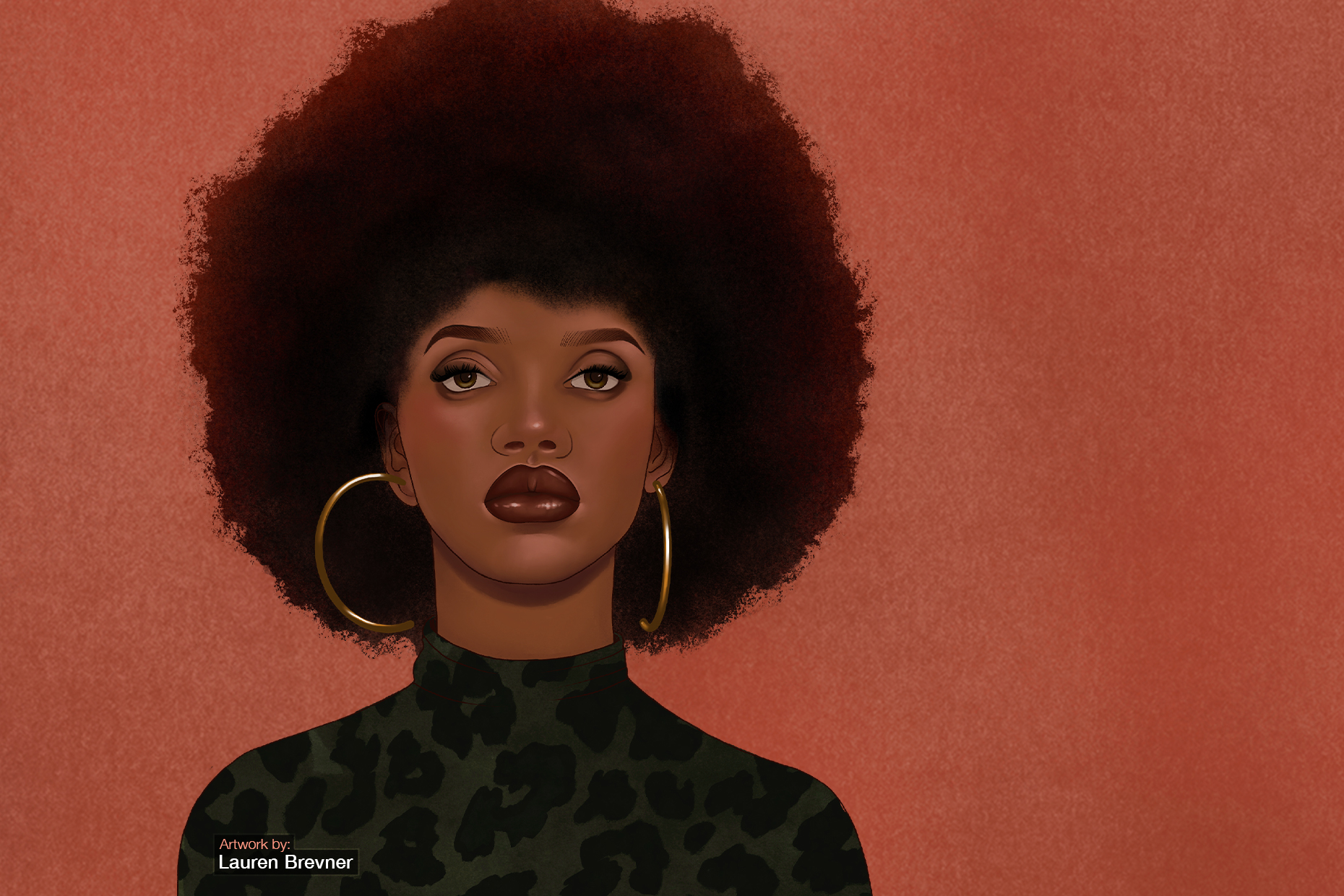 The cultural landscape and thought possession around Black hair changed during the 1960s where the term, “Black is beautiful'' emerged. This coincided with the Civil Rights Movement and an uprising demand for Blacks to have more equality.

According to Byrd and Tharps, the afro style emerged in the late 1950s and 1960s. The Afro’s message was about “freeing your mind,” as explained in All About Natural, a popular how-to written by Lois Liberty Jones. The book describes, “We found our Black beauty and the pride to go with it.” As with many social revolutions, this aesthetic uprising took root on college campuses. It started in the mid-sixties with students who were reading the works of Black nationalist thinkers of the past, such as W.E.B Dubois and Marcus Garvey.

The Afro is known to many through the 1970s look and as part of the Black Panther party. Cicely Tyson was among the first Black female celebrities to showcase the Afro. These movements were to push for more equality and were seen as having the original mission of being a terrorist group, and this inaccurate perception remains alive today.

Wearing an Afro was seen as a strong resistance to assimilation of the Afro-textured hair. No more straightening, altering, shifting or considering the opinion of others’ thoughts on Black hair. In Tharps and Byrd’s book ‘Hair Story: Untangling the Roots of Black Hair’ they state, “Assata Shakur, when she was attending Manhattan Community College she stated, ‘My image of myself was changing, as well as my concept of beauty. One day a friend asked me why I didn’t wear my hair in an Afro, natural…The more I thought about it the better it sounded….To make [my hair] natural I literally had to cut the conk off.’”

There has been since a second natural wave movement for Black women that has emerged in the natural beauty products that are more conducive to curlier and kinkier hair. Black women now continue this mentality by wearing their hair in all types of natural styles.

Afro-textured hair deserves to thrive in its natural integrity and shouldn’t prohibit one from advancing in a workplace or present a series of questions based on their intellect or capability.

Jasmine Gayle is a freelance writer with a Bachelor's Degree in Writing from Ithaca College who covers mental health, education and issues impacting the Black community. She's passionate about engaging in critical sociopolitical discourses.