Lessons from The Nikkei Redress Movement

The Fight for Reparations for WWII Incarceration

Redress—Yuri Kochiyama reading her testimony at the redress hearings in Washington, DC in July 1981. 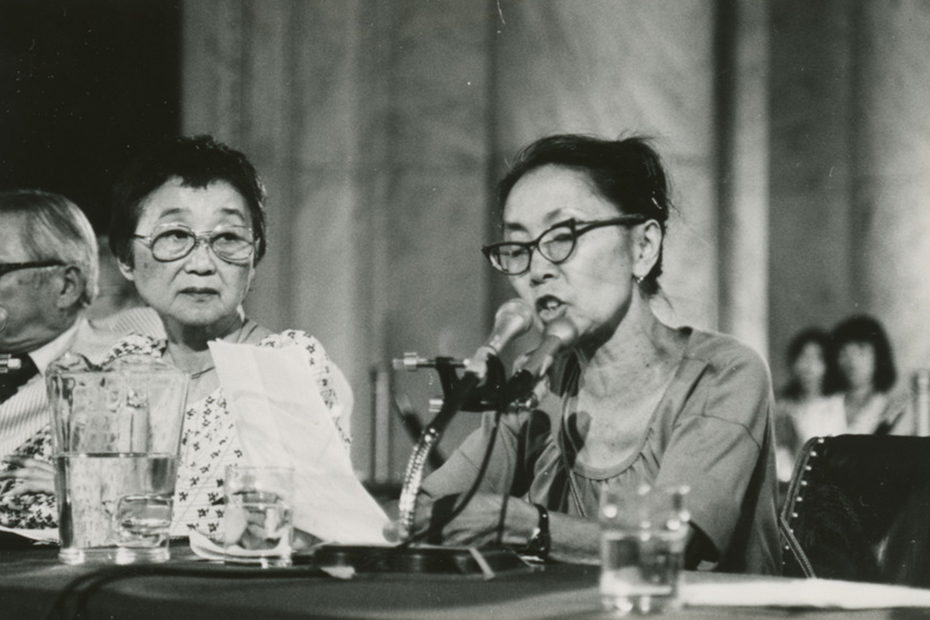 Authored by activists, historians, and memory keepers from Asian-heritage communities, this series documents key moments of past injustice and bravery—revealing connections to the present-day and celebrating movements for change. Read all 4 stories in A History of Resilience here.

2022 marks the 80th anniversary of the forced removal and incarceration of Japanese Americans during World War II. Some 125,000 Japanese Americans, nearly two-thirds of them U.S. citizens, were exiled from the West Coast of the United States and imprisoned in ten remote concentration camps and dozens of lesser known prison camps scattered across the country.

This mass displacement and dispossession was not limited to the U.S. Another 22,000 Japanese Canadians were uprooted from their homes in British Columbia and held in desolate detention camps or sent to labor on sugar beet farms in the interior of the country.

My own family was spared this exile, thanks to geography and bureaucratic whim. The tiny eastern Washington mining town where my Issei great-grandparents raised my grandmother and her siblings was outside of the military "exclusion zone." My great-grandfather was arrested and detained for several weeks when a friend reported him to the FBI for not turning over the radios, guns, and ammunition he stocked in his general store, as Japanese Americans had been ordered to do after Pearl Harbor. It was a humiliating and, I imagine, frightening experience for the entire family, but still a far cry from the years of imprisonment that so many others endured.

Nikkei (people of the Japanese diaspora) who were subject to WWII removal and incarceration lost homes, businesses, and life savings. Many had nothing to return to when they were finally released from the camps and struggled to rebuild their lives from the ground up. Beyond these material losses, survivors also carried psychological trauma from the military roundups, family separations, dehumanizing conditions in the camps, and discrimination and even violence upon their release.

It would take four decades—and much grassroots organizing by survivors of the incarceration and their descendants—for the U.S. and Canada to admit that their wartime actions were the result of racism and xenophobia, not “military necessity” as they claimed in 1942.

The Road to Redress

Upon their release from the camps, some former incarcerees began to push back on discrimination against Japanese Americans and other communities of color—lobbying for compensation for former incarcerees, an end to racist practices like restrictive covenants and alien land laws, and naturalization rights for Asian immigrants who had previously been barred from US citizenship.

In the 1960s and 1970s, survivors and younger activists whose parents and grandparents had been in the camps began to call for reparations for the wartime incarceration, inspired by the Black Liberation Movement and other anti-racist and anti-imperialist struggles. In the U.S., grassroots activists mobilized Japanese Americans to join the burgeoning Redress Movement, while researchers like Michi Weglyn uncovered evidence of government misconduct during WWII, and Japanese American Citizens League lobbyists pressured Congress to take action. Meanwhile, Japanese Canadians organized the Powell Street Festival and other events to mark the centennial of Japanese settlement in Canada, sparking renewed pride in their Nikkei heritage and a similar movement for reparations. A redress campaign led by the National Association of Japanese Canadians soon followed.

In 1980, U.S. President Jimmy Carter established the Commission on Wartime Relocation and Internment of Civilians. This congressional commission was charged with investigating the facts surrounding the WWII exclusion of Japanese Americans, Aleut civilians forcibly removed from Alaska, and other American citizens and permanent residents. More than 750 witnesses testified about the impact of the incarceration and its aftermath at eleven CWRIC hearings the following year, culminating in an official acknowledgement that the wartime government had acted on racial prejudice rather than “military necessity”—and a recommendation for monetary redress.

On August 10, 1988, the Civil Liberties Act granted a formal apology and $20,000 to each surviving Japanese American detainees. One month later, the Canadian government passed their own redress package with an official apology, $21,000 to each surviving Japanese Canadian who was forcibly removed, and the recovery of Canadian citizenship for more than 4,000 people who were deported to Japan at the war’s end.

This landmark legislation is rightly remembered as a powerful example of what marginalized communities can achieve when we reclaim our stories and mobilize to hold politicians accountable to those they claim to serve. But it would be a mistake to treat the Redress Movement as purely in our past while there are related calls for justice in our present.

More than thirty years later, the violence of detention, displacement, deportation, and other racist systems that contributed to WWII incarceration are still very much alive. Notably, Black and Indigenous communities, as well as 2,200 Japanese Latin Americans who were excluded from the Civil Liberties Act, are still calling for justice and reparations today. The fight for redress—for the repair of past harm and the building of a more just future—is not over.

To make “Never Again” a reality, we must link our struggles and build solidarity across communities, across generations, and across borders. We must recognize our own story as part of a much larger trajectory of racism, colonization, and white supremacy—and let this shared soil move us to action.

Nina Nobuko Wallace is the Media and Outreach Manager at Densho, an online archive and public history organization that documents the stories of Japanese Americans who were incarcerated during World War II. Nina is a yonsei (fourth-gen Japanese American) and aspiring J-town auntie who writes about hidden histories and intersections between past and present for the Densho Catalyst and other publications. In her work at Densho and beyond, she is passionate about personal stories, public history, and empowered communities.