A History of Pride

All about the early shakers, the stigma breakers and the change makers

Up until 1973, being gay was officially considered a mental disorder by the American Psychiatric Association (APA).

Today, we might scoff at such an idea, but for so many LGBTQ2+ people it was impossible to live their lives openly without facing discrimination, violence and oppression in the U.S. and elsewhere. The pride movement was the catalyst for change that would improve the lives of millions of people around the world.

A time of oppression

Following the end of World War II, a conservative and somewhat paranoid air permeated the United States. With anti-communist sentiment on the rise both in government and in the public sphere, people who were deemed “secretive” and “subversive” were considered security risks by the State Department—including “untrustworthy” homosexuals, and by extension anyone else who fell under the LGBTQ2+ umbrella. This led to widespread discrimination, including the public humiliation of queer folks. Many found themselves physically abused, fired from their jobs, incarcerated or even locked up in mental institutions.

The pushback was slow-moving at first, with many supporters fearing isolation and professional ruin if they dare voice their opinions in public. One brave woman challenged the stance of the APA, psychologist Evelyn Hooker. She was inspired to study members of the LGBTQ2+ community after befriending a gay student and meeting his circle of friends. Her work argued against the APA’s conclusion that homosexuality was a mental illness, and led the way to the eventual removal of homosexuality from APA’s manual of mental disorders.

Another early agitator was Harry Hay, aka “the father of gay liberation”. In 1950, he co-founded The Mattachine Society, one of the earliest LGBTQ+ organizations in the U.S. Not long after, eight women including lovers Del Martin and Phyllis Lyon founded The Daughters of Bilitis, the first lesbian civil and political rights organization in the U.S. Another gay rights organization founded in 1952, One, Inc., published a magazine called One, the first pro-gay publication in the country.

Fast forward to 1966: Compton’s Cafeteria would be the setting for a riot by drag queens, hustlers and trans folks—a protest against police brutality and discrimination. This event is today acknowledged as the beginning of transgender activism in San Francisco.

However, it wasn’t until 1969 that a shift in the community would shake up the structure of society, and which would be felt far and wide for years to come. 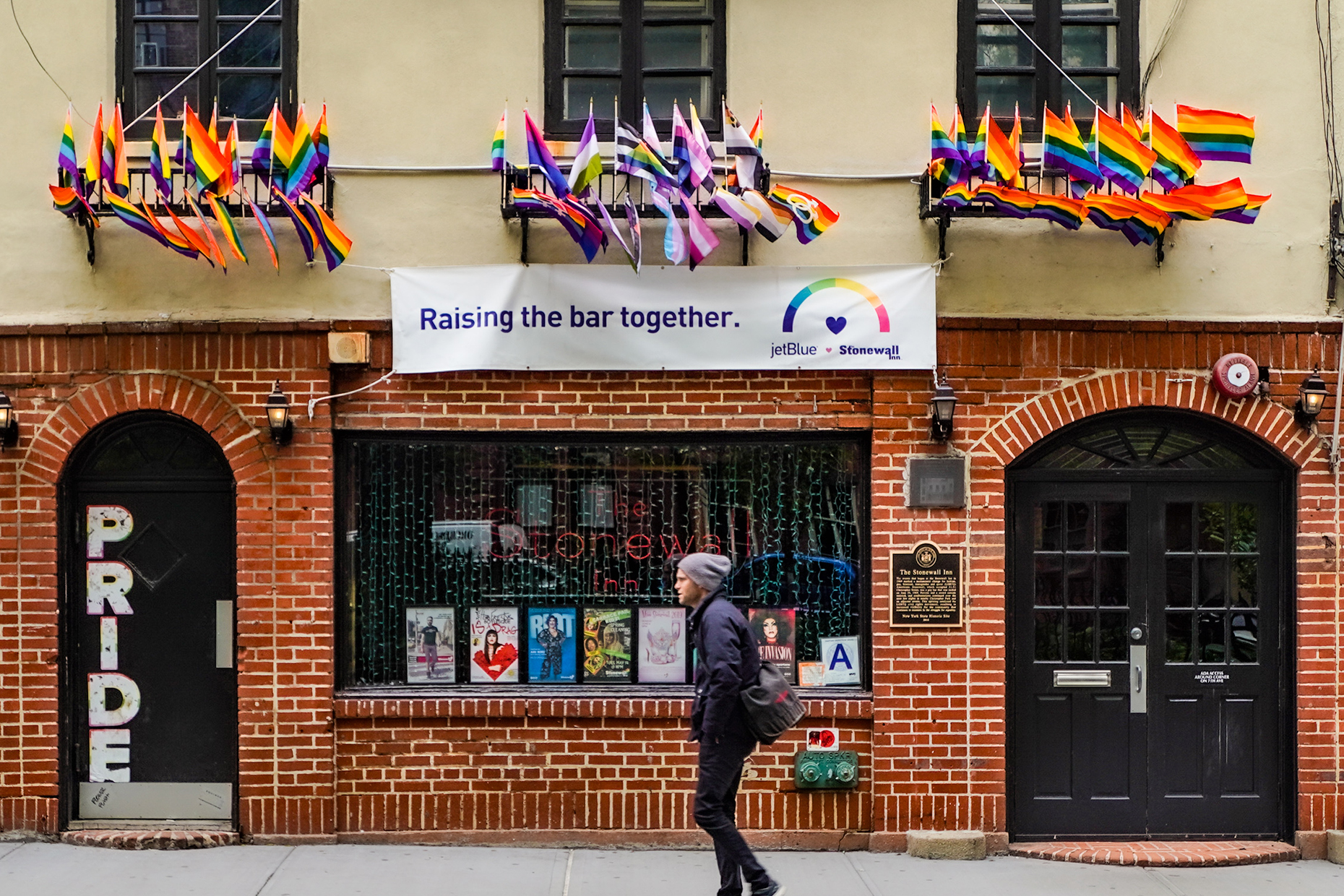 Rebellion at the Stonewall

The police raids weren’t unusual. Those who regularly attended the Stonewall Inn on Christopher Street—one of the most popular gay bars in New York in the late 1960s—expected it to happen at least once a month. But in the early hours of June 28, 1969, patrons had enough of police brutality, homophobia and transphobia: they decided to fight back.

According to eyewitnesses, after a woman was beaten and thrown into a police wagon, a stone was thrown at police—followed by bottles and coins—and violence erupted. Fires broke out and the Stonewall Inn saw its windows smashed and interior destroyed. Scenes of unrest continued long into the early hours. Then, a second night of violence and disruption. Word spread, support grew and action continued to be taken: the uprising had begun.

The Stonewall Riots are viewed as the most important event leading to the gay liberation movement, and the ongoing fight for LGBTQ2+ rights in the U.S. Two people who were hugely influential at the time of the riots and what was to follow were transgender women Marsha P. Johnson and Sylvia Riviera, both gay liberation and transgender activists. They were heavily involved in the revolt at the Stonewall, and they were both founding members of the Gay Liberation Front and Gay Activists Alliance—two major organizations formed shortly after the riots. They also co-founded the Street Transvestite Action Revolutionaries, which was dedicated to helping young drag queens and trans women of color.

Christopher Street Liberation Day would take place on June 28, 1970—a year after the riots. This would eventually become known as the pride parade, which has taken place every year in cities around the world. The parade has been ever-present through the years as a political demonstration for equal rights and played a major role during the AIDS epidemic of the ‘80s and ‘90s. In the early ‘90s, the parade began to resemble the one we know today: a colorful celebration of sexuality and individuality, as well as still being a movement for liberty and equality.

Since the momentous days at the Stonewall Inn, and as the pride parade has marched loudly, determinedly and playfully from city to city, major milestones have occurred: from Elaine Noble becoming the first openly gay candidate to be elected to a state office in 1974, to Harvey Milk’s election a couple of years later (Milk has since had a U.S. Navy Tanker named after him). From the legalization of same-sex marriage in the U.S. to gay rights victories in countries around the world, a lot has been achieved. But the march towards justice has not been without its setbacks. In 2017, workplace protections for LGBTQ2+ people in the United States were rolled back, and other rights and protections are still under threat. There's still work to be done.

A matter of pride - today

The day after boisterous pride celebrations, many will wake up having embraced their individuality, the spirit of the movement still coursing through their veins. Not so far away, however, someone else will wake up, rub the sleep from their eyes and bury their identity down in the pit of their stomach. They’ll go about their day wearing a mask of conformity because if they don’t, they may be shunned, exiled, imprisoned, or worse—they may face death.

Despite the great strides made over the past few decades, LGBTQ2+ folks live with the reality that hate crimes are still a regular occurrence, both in North America and abroad. Still LGBTQ2+ individuals don’t have the same rights as their heterosexual and cisgender friends. In over 70 countries around the world, it’s still illegal to be gay. In these countries, LGBTQ2+ people of all ages face discrimination for being who they are, and can’t live publicly. They’re waiting for the signal from those who will stand with them and give them the courage to fight back. And that’s the essence of pride: individuals taking a brave, bold stand for the right to be themselves, but also showing one’s support for those who face punishment for simply being who they are. This is why pride still matters—perhaps now more than ever. And while there’s plenty to celebrate—and celebrate we should—there’s plenty to be done.

Without the early agitators and supporters of the LGBTQ2+ movement, we might not be where we are today, with pride celebrations that continue to inspire change and remind us that human rights are for everyone. A few brave folks in history stood up and created a movement that would change innumerable lives across the globe. Because sometimes even small changes are just a stone’s throw away.