The deep, earthy scent of patchouli is unmistakable.

Its instantly recognizable aroma is often associated with incense and hippies, but its roots in traditional medicine, its role in the 19th century cloth trade and its effects on the mind and body may surprise you!

The patchouli plant is a bushy herb that’s part of the mint family. It’s native to tropical regions of Asia but is now cultivated all over Asia, West Africa and South America. Its stems reach a height of 3 feet with small flowers and soft, aromatic leaves. It’s been used in perfumery and traditional medicine for centuries, as it was believed to promote healthy skin, help heal wounds and strengthen the immune system.

Did you know that patchouli is also a moth repellent? It was used widely by India’s fabric manufacturers in the 19th century to protect their products from damage while in transit. It became the signature scent of clothing and fabric exported from India, captivating the senses of those who received them. It also became a guarantee of authenticity—the source of the exotic fragrance was a mystery, so fraudulent fabrics were easy to spot because they didn’t have the signature patchouli scent.

Patchouli is a bushy herb with small flowers 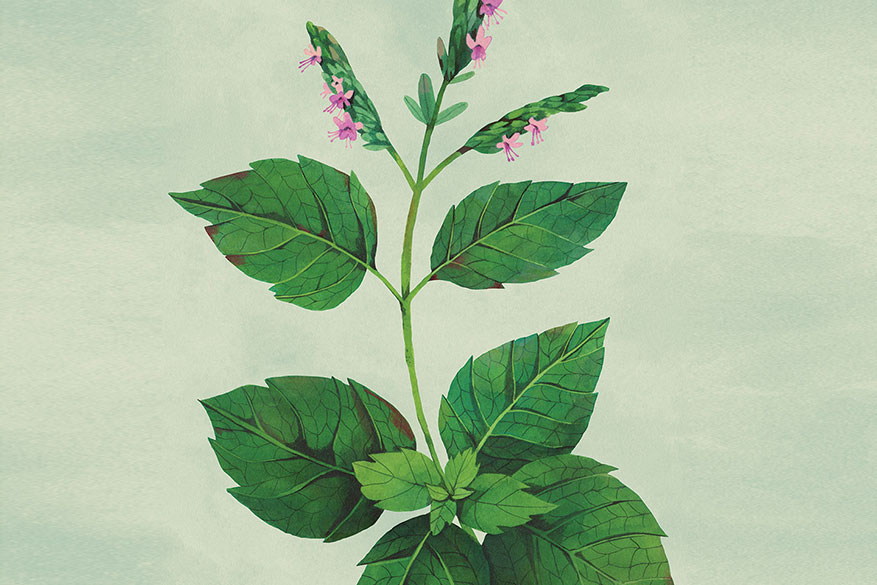 To make patchouli oil, the leaves are harvested then left to dry in the sun before the oil is extracted using steam distillation. Patchouli oil like a fine wine—it gets better with age! Over time, the oil’s fragrance becomes richer and sweeter, and its color turns from light yellow to deep amber.

Patchouli’s rise to fame in North America happened during the ‘60s and ‘70s, when it was strongly associated with hippies and free love, partly due to “The Hippie Trail”: a backpacking pilgrimage of 12,000 miles through Istanbul to Iran, Afghanistan, Pakistan, Nepal and India. The wanderers who completed the trek often brought the oil home as a souvenir of their travels.

Since then, patchouli has diverged from its hippy reputation (though not entirely!). It’s now renowned as an excellent base note in perfumes, adding a deep and earthy scent when blended with other fragrances.

We use patchouli oil across multiple ranges of products, from perfume and deodorants to skincare and body lotions. In fact, patchouli plays a leading role in one of our most popular fragrances, Karma. It’s blended with refreshing lemongrass and pine to create a scent that’s a unique blend of citrus and spice. You’ll find it in a spray perfume, a soap, a shampoo bar, a bubble bar and a body lotion, so you can infuse your whole routine with good karma!

This earthy oil’s fragrance is relaxing, calming and grounding on the mind, making it an ideal bathtime companion. Blue Skies And Fluffy White Clouds Bubble Bar is a fan favorite for sinking into a serene state of mind. It’s also a powerful deodorizer, so you’ll find it in two of our deodorants: The Guv’ner and Aromaco, which keep you smelling fresh no matter the conditions. But patchouli also has a soft side—its soothing touch calms irritated or sensitive skin, so you’ll find it in our gentle Breath Of Fresh Air Toner and BB Seaweed Fresh Face Mask.