The Women Winning the War on Poaching

The war on poaching won’t be won with guns, but with education.

This is the belief of the Black Mamba Anti-poaching Unit, the first majority female anti-poaching unit in South Africa. Founded in 2013, the group protects all boundaries of the 52,000-hectare Balule Nature Reserve, part of the Greater Kruger National Park in South Africa.

An inhospitable place for poachers

Made up of 32 young women and one man, the Mambas all have a passion for wildlife and conservation. They’re responsible for the early detection of poachers through their surveillance and patrol efforts, and perform daily boundary checks, set up road blocks and search for snares and traps. The members are unarmed—they’re the skilled eyes and ears of armed tactical response units that can be called when needed.

By their visible and persistent presence in the reserve, the Black Mambas strive to make it the most undesirable, most difficult and least profitable place for poachers. They protect animals like elephants, lions, pangolins, rhinos and antelope from being killed for their meat and perceived medicinal value. Since they’ve begun patrolling the reserve, snaring and illegal bush meat incidents have been reduced by 75 percent and the number of rhinos lost to poaching has plummeted.

Although they’re actively fighting against poachers in their reserve (and winning), the group believes that the long-term solution to poaching is youth education. 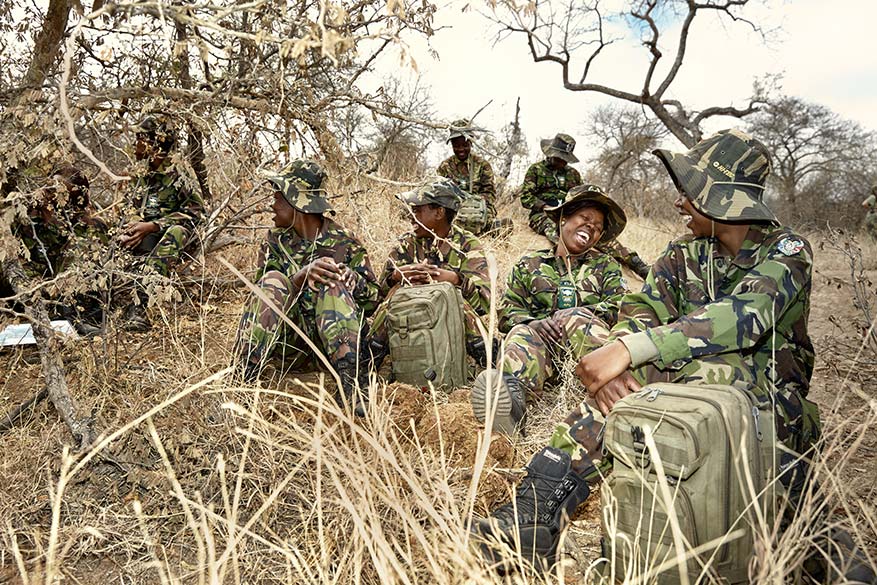 The Black Mambas aren’t only the front line of protection for animals in the reserve, they’re also role models in their communities. They want everyone to understand that conservation benefits far outweigh those of poaching, so they’ve developed the Bush Babies Environmental Education program.

It’s an environmentally based program that’s offered in 10 schools surrounding the Greater Kruger Park. For one hour per week, students learn about conservation, ecology and the importance of rhinos. The program teaches kids the value of their natural surroundings and how they can help protect them for future generations.

Since its beginning in April 2015, the program has reached more than 2,000 children. The Black Mambas flip the cliché that it takes a village to raise a child, and instead believe that children raise their community. By investing in children, they believe they’re helping to shape the next generation of environmental leaders.

How you can help

We’re proud to support the Black Mamba Anti-poaching Unit through our Charity Pot program. The entire purchase price (minus the taxes) of Charity Pot Body Lotion is donated to grassroots organizations like Black Mambas working for human rights, animal protection and environmental justice.

To support the Black Mambas directly, you can sponsor a Mamba, purchase swag from their shop or make a cash donation. To learn more about the Black Mambas, visit their website or Facebook page!