Chemists of the Natural World

When Carl Linnaeus gave the honeybee its scientific name, Apis mellifera, in 1758, he didn’t have much clue what was going on behind the scenes. The name literally means ‘honey-bearing bee,’ suggesting that bees carry honey directly from the flowers. Likely red-faced, he tried to amend the title to ‘honey-making bee’ in a later edition, but by then the name had already stuck.

Thankfully, today bees are recognised for their role as natural chemists.

“I know of nothing similar in the animal kingdom,” says Jonathan Powell, trustee of The Natural Beekeeping Trust. “Their effect on the natural world is immense because they don’t just influence the plants, but the herbivores who eat the plants, and the insects that live on the same food sources. They are right at the heart of the natural world; they are the farmers that provide food directly or indirectly for all other species. We should respect this gift more and consider more carefully how honey is produced.”

This is something that Dorset beekeeper Mike Madgwick, who cares for 25 hives, knows a lot about. “Honey is basically a supersaturated solution of monosaccharide sugars—fructose and glucose,” says Madgwick. “Bees store nectar in a honey stomach, a specially adapted portion of their gut that enables them to transport nectar back to the hive. A honeybee can carry a considerable amount of nectar by weight compared to its own body weight.” 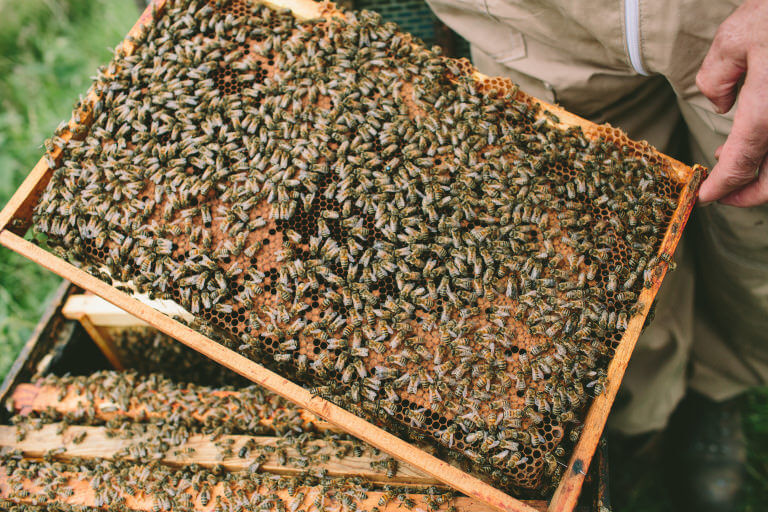 Madgwick explains that once back with the rest of the colony, the foraging bee will regurgitate the nectar to other bees in the hive whose special function it is to make honey. Through a process of repeated regurgitation between bees in the colony, the magic happens. The nectar is progressively concentrated down from 70 to 80 percent water to less than 20 percent water. This super-concentrated nectar, with some chemical changes as the mix of sugars is altered, is honey.

Transitioning nectar to honey is a delicate procedure, requiring meticulous attention to detail. As the nectar is concentrated, enzymes and minute amounts of antioxidant agents from the bees’ stomachs are added to the solution. It’s only when the nectar is super-concentrated that it is added to the cells in the colony’s hive reserved for food storage. “The concentration is important, as if there is more than about 20 percent water, a danger exists that the honey might ferment, which would make it useless as a food for the bees,” says Madgwick.

“Very few bacteria and microorganisms can survive in honey,” says Diane Roberts, press officer for the British Beekeepers Association. “It is also acidic with a pH between 3 and 4.5, which helps to limit bacterial and fungal overgrowth.”

Responsible beekeeping around the world

The naturally self-preserving, antimicrobial properties of honey have made it a rich, valuable ingredient throughout human history. Cave paintings in Ancient Egypt dated to 2400 BC display scenes of bee-keeping so similar to modern methods that in her 1984 book, “The Archaeology of Beekeeping,” Eva Crane writes: “There has, in fact, been relatively little change even in 4,400 years.”

And, while technique may not have changed a great deal since the ancient Egyptian era, demand for the golden delight is far higher. Honey is regarded a staple store cupboard ingredient around the world, but, given its precious nature, it is important to ensure beekeepers act as guardians of the bees, instead of as the producers of honey.

Travel deep into the raw, uncultivated forests that cover around 60 percent of Zambia, and you’ll hear the hum of these wild insects in flight, busy amongst the flora. Wild beekeeping a popular source of income for local communities and locals act as stewards for the bees’ environment rather than adopting the use of pesticides or herbicides.

“There is a huge level of expertise and a great respect for the bees, and beekeeping is a skill that gets passed down from generation to generation,” says Gabbi Loedolff, an ingredients buyer at Lush. “The parents here teach their children beekeeping skills from a young age to ensure that they are not scared of the bees, and because, even if they go into a different industry, it's a respected skill that can provide valuable supplementary income.”

Wild beekeepers create traditional handmade hives in the tree bark using knowledge passed down through the generations. One tree can be used to create between 15 and 20 beehives, which house bees for around 10 years, and have a minimal impact on the environment. To recover the honey, beekeepers shimmy up trees—normally without any protective kit—to retrieve the hollow hive cylinder made of bark and extract the rich honeycomb inside. It’s a challenging maneuver, dictated by the preference of the bees for high hives.

Taking beekeeping back to basics

Zambian beekeeping is an intrepid form of honey harvesting compared to widespread commercial production, but similarly pioneering techniques are developing closer to home too. Back to basics, Devon, U.K.-based beekeeper, Philip Chandler, adopted a more natural approach to beekeeping years ago in a bid to help bee numbers swell. “I started off with conventional equipment and hives and very quickly started questioning why it was necessary to use all this complex gear for what is essentially a simple operation,” he says. “Our interactions with the honeybee don’t need to be as complex as they are.”

Chandler complements his use of top bar hives—simple designs which give bees a greater degree of freedom in how they build their combs—with breeding techniques that will help his bees to fight local diseases, or, as he puts it, “solve their own problems.” For example, he reveals that he has just bought three queens from the University of Sussex because these bees have a particular skill. “The queens are able to detect Varroa destructor mites in the cells and get the workers to drag these out,” says Chandler. “They’re also very disease resistant and those are particular traits that I want to breed into my bees.”

Chandler also suggests that honeybee numbers have improved, although not beyond the point of concern. “Honeybees do have problems but these are largely problems of our own making,” he says. “Varroa destructor mites that have spread around the world on the back of the beekeeping industry and the threat of chemical agriculture.”

Given the importance of bees in the natural world, perhaps creating habitats and wild hives to house and protect them is a responsibility that shouldn’t be ignored.