*We're currently unable to buy vanilla from this source due to poor crops and bad harvests, but we look forward to receiving this beautiful ingredient again in the future. To learn more about this, check out Not Such a Sweet Deal.

The clouds lift and the Mountains of the Moon, the Rwenzori, in Western Uganda, are revealed in all their magnificence. This is the source of the River Nile and also the source of our new fair trade vanilla. The area is perfect for growing vanilla. The hills are covered with tropical vegetation, the soils are rich and damp and the high altitude results in slow-growing, potent beans with an intense aroma.

Sitting on the veranda of one of the Ndali Estate’s chalets overlooking the Rwenzori, Lulu Sturdy tells us how she inherited the estate from her uncle in 1999. She took on an ailing farm that was making losses on various crops, including coffee and bananas. In just seven years, she transformed the farm’s fortunes and is now at the helm of one of the world’s first fair trade vanilla exportation cooperatives, which employs 1,200 fair trade farmers, all of whom own their own land close to Ndali. The Mubuku fair trade farming co-operative—groups of local farmers who have joined forces—and the Ndali Estate grow the top quality fair trade organic vanilla beans. The Mubuku fair trade farmers supplying the estate have been working hard to develop new techniques to encourage growth and are paid fairly for their efforts.

Vanilla beans, or pods, are the dried unripe fruits of the orchid Vanilla planifolia. It’s thought to have originated in Mexico where indigenous bees sometimes pollinate the flowers, each blossom producing a single bean.

In Uganda, there aren’t enough of these bees to do the job. Instead, each flower is pollinated by hand using a small needle—a method which was pioneered in the nineteenth century. Farmers’ plantations are small, averaging 250 vines per half-acre, and require huge amounts of tender loving care in training, pruning, mulching and hand pollinating. Around the Mountains of the Moon, it sometimes takes five-to-seven years to break even with a vanilla crop.

An incredibly labor-intensive crop to grow, vanilla is the second most expensive spice, after saffron. This painstaking and costly process leads many cosmetics companies to use synthetic vanilla in their products as vanillin molecules can be easily and cheaply reproduced in laboratories. 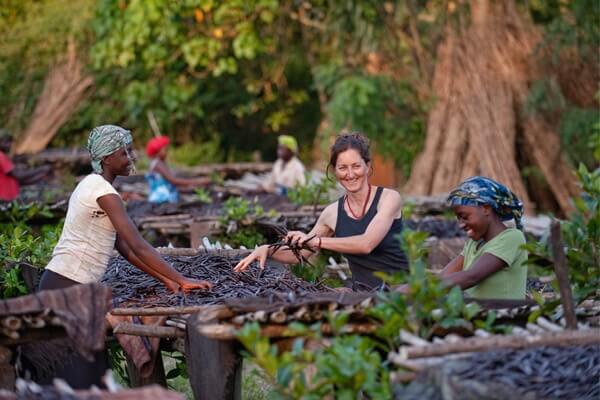 It takes several months to produce vanilla absolute, which is the thick, sweet-smelling brown substance that’s extracted from beans. The vanilla beans are harvested after eight-to-nine months and are boiled in water for three minutes. Over the next four months, they’re dried slowly in the sun for around two hours per day, then covered in blankets and taken in at night to stimulate the chemical process, which causes vanillin crystals to develop.

Ndali beans are very unusual in that a high proportion develop iridescent vanillin crystals on their surface—this is like the champagne of vanilla, only rarer. To achieve this they have to be nurtured, harvested and cured using exceptional methods, which Ndali, understandably, keep secret.

Once the beans are ready, they journey to France where they’re transformed into the fair trade vanilla absolute that we use in our products. Agnès, from our UK buying team, was closely involved in sourcing the Ndali beans. She says, “We wanted to work on producing our own vanilla absolute for a long time as it’s an amazingly beautiful ingredient which we’re passionate about. This is the result of a long journey which involved finding the right vanilla producer and ensuring that the quality of their beans was high enough as well as finding people to work with to produce our absolute. The fair trade vanilla beans create a beautiful vanilla absolute and by using this ingredient we also support the hard work of the fair trade vanilla growers in Uganda.” Fair enough?

To us, using fair trade and fairly traded ingredients is key. As Lulu says, “We focused on the fair trade market because it was the only thing that made sense to me. Isn’t it natural to want to work with happy people and find the most harmonious working relationship with your suppliers?”

At Lush, we look for suppliers who are honest, transparent and hard working. Like Lulu, working with happy people is in our blood and where we find them they will have our trade. Sometimes our suppliers can’t afford the fees or administration of joining with certifying bodies and we feel that this is their prerogative. Instead we encourage empowerment to make those decisions themselves. We dream of a day when all trade is fair and we work our hardest towards that day.