In 2015, 289 grizzly bears were killed for sport in British Columbia.

In 2016, the US government was considering de-listing the Yellowstone grizzly population from Endangered Species Act protection, and in BC, organizations long working to protect bears saw trophy hunting play an important role in the latest provincial election. To speak up for bears, we decided to use our shops and website as a platform to share a simple message: trophy hunting is outdated, wasteful and inherently cruel. Through our campaign, we demanded an end to the trophy hunting of grizzly bears.

In November 2016, we released a short documentary called “Trophy” to raise awareness about trophy hunting in North America. It explores a number of complex issues through conversations with hunters, activists, scientists, conservationists and representatives from First Nations groups. You can stream or download the film and take action to protect bears at trophyfilm.com. To further support the film and campaign, we released the limited edition Great Bear Bath Bomb, designed by First Nations artist Jeff Robinson. 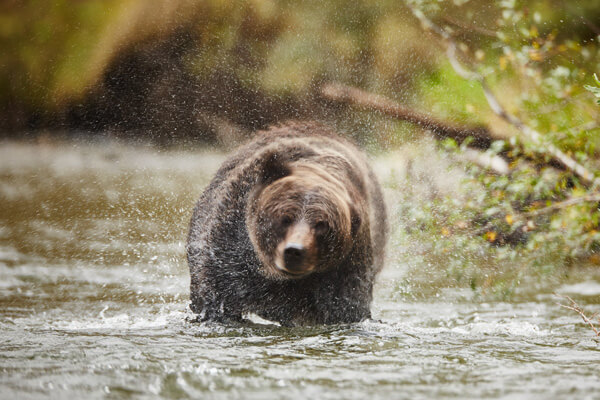 We also asked customers to sign postcards and online petitions in support of grizzly bears. In the U.S., in collaboration with the Center for Biological Diversity, we sent signed postcards to the U.S. Fish and Wildlife Service, urging them to protect Yellowstone grizzlies by keeping them on the Endangered Species list. In Canada, we delivered signed postcards with petition signatures from Pacific Wild and the Humane Society International – Canada to BC’s provincial legislature to show just how many Canadians oppose trophy hunting.

Over the course of our campaign, our film “Trophy” was viewed 22,000 times and was also screened at 20 locations across North America. And through the sales of the Great Bear Bath Bomb, we raised $200,000 for our Grizzly Grants fund! This money went on to support organizations—like Raincoast Conservation Foundation, the David Suzuki Foundation and the Center for Biological Diversity—that are working to protect bears in North America.

In the US, we collected more than 55,000 signed postcards, and in Canada, we gathered 78,420 names of individuals opposed to trophy hunting, adding a strong chorus of voices in support of grizzlies in conversations around trophy hunting.

UPDATE: In August 2017, the British Columbia government announced a province-wide ban on trophy hunting grizzly bears that went into effect on November 30, 2017!