Young researchers and the Lush Prize

2016 marks the first year the Young Researcher Prize for the Americas will be awarded. Stay tuned for this year's winners!

Every year, more than 100 million animals are killed in North American laboratories for educational lessons, medical training, experimentation, as well as for chemical, drug, food and cosmetics testing. Animals are often subjected to cruel, inhumane conditions, all in the name of science. However, testing on animals for cosmetics doesn’t necessarily predict reaction humans might have.

For more than 40 years, Lush has been fighting against animal testing—it’s cruel and ineffective, and despite some changes in the last four decades, there’s still so much more to be done. To date, the European Union, India, Israel and Norway have all banned cosmetics testing on animals. More recently, China has passed a law to ban the requirement of animal testing on cosmetics (but for domestic manufacturers only) and Australia’s federal government has announced that it plans to ban the sale of cosmetics that have been tested on animals by July 1, 2017.

In North America, however, very little has changed. Two new acts have been introduced: the Humane Cosmetics Act in the U.S. and the Cruelty-free Cosmetics Act in Canada, which would both ban testing on animals, but neither of these bills has been passed in their respective countries and the process is slow-going. Until animal testing is banned worldwide, Lush will continue to challenge policy makers and the industry to ensure this inhumane practice is one day abolished.

After years of campaigning and lobbying against animal testing with no end in sight, Lush founders established the Lush Prize in 2012 in collaboration with the UK not-for-profit group Ethical Consumer Research Association. This annual prize was created to support and recognize advances in science that promote cruelty-free alternatives to animal testing. Since its inception, it has honored and awarded an annual £250,000 prize (more than $360,000 USD) to a variety of scientists, lobbyists, educators and researchers in five categories: lobbying, public awareness, science, training and young researchers.

For 2016, the Lush Prize is expanding its reach. For the first time ever, a Regional Young Researcher Prize will be awarding a $75,000 USD fund to share among five winners in North and South America. Open to keen young scientists (up to 35 years old at the time of applying), this regional prize will provide support for those with a desire to pursue a career focused on creating animal testing alternatives. Many scientists are deterred from working in the field of toxicology because of ethical concerns around the use of animals, and securing funding for non-animal tests is often a barrier. The Regional Young Researcher Prize is designed to give scientists the funds needed to continue innovating in the field of toxicology without the need for animals.

In 2015, six post-doctoral students specializing in the development of animal-free toxicology testing were awarded the Young Researcher Prize. Each of the winners took home a £10,000 prize to help them continue their work in their respective areas.

Before becoming a Young Researcher Prize winner, biologist Bianca Marigliani was working on finding a way to replace the use of fetal bovine serum (FBS) in allergy testing. Each year, nearly two million pregnant cows are slaughtered to obtain FBS from the fetuses—an inhumane method that requires a cardiac puncture to the fetus without the use of anesthesia. Marigliani’s research seeks to use a synthetic material for allergy testing that would completely eliminate the need for fetal bovine serum. In addition to the ethical nature of her research, this artificial alternative is also less prone to contamination.

For his work on an alternative to animal testing, Iowa State University student Jeremy Caplin was one of the Young Researcher winners for 2015. Caplin’s work involved the design and use of a “placenta-on-a-chip”; a 3D device that serves as a method for drug testing and toxicology. During pregnancy, the placenta is susceptible to various diseases but current drug testing methods for medications are considered unethical and unreliable. The placenta-on-a-chip replicates organ functions within the placenta providing an environment that facilitates the natural properties found in placentas making this a human-realistic model for testing.

Dr. Lena Smirnova was one of the Young Researcher Prize winners for 2015 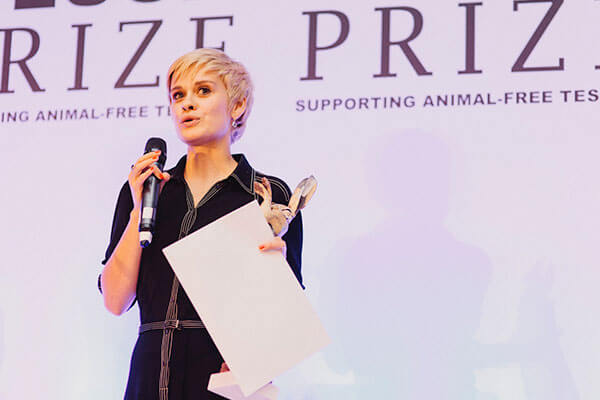 21st Century Toxicology is a new approach to safety testing that offers better relevance to humans instead of using mice, rats and rabbits. It can explain the underlying causes of toxicity in humans, which helps predict how embryos, children and adults will react to chemicals. Dr. Lena Smirnova’s Young Researcher Prize-winning work focuses on using human-relevant 3D models and pathways of toxicity identification to identify how environmental toxins affect our bodies and lead to neurological diseases such as autism and Parkinson’s disease. Her overall research goal is to develop new and more predictive methods without the need for live animals.

We'll be announcing the winners for the Young Researcher Award for the Americas on November 1st. Check back to see which lucky innovators will share the first regional award of five bursaries of $15,000 USD each (for a total of $75,000 USD). Until then, visit lushprize.org to see who made the short list or read more about what it's like to win the Young Researcher Award.