The Future is Sweet

Honeybees are in trouble, but SLush Fund partner Miels d’Anicet is working to save them—one queen bee at a time.

As the early morning sun soars high above the mountains in Northern Quebec, Canada, its light gently bathes the still-frosty world in warmth. It’s springtime at the Miels d’Anicet farm and it’s a busy time for beekeepers Anicet and Anne-Virginie. Anicet’s family has been harvesting certified organic honey for nearly 40 years, but recent seasons have brought new challenges.

About a decade ago, the global bee population suddenly declined. Beekeepers around the world were reporting unusual hive losses of between 30 and 90%. Bees were simply abandoning their colonies, never to return. Scientists believe that this disappearance is caused by a combination of factors, including local diseases, exposure to pesticides and climate change. And when these things affect the queen of the hive, the whole colony is in danger.

For plants and crops to thrive and grow, we need bees. As they feed on flowers, they’re also pollinating as they move from plant to plant. In fact, most of the crops that we rely on for food depend on this cross-pollination, and without it, we could lose them all.

In Canada, the situation is dire: last year, Quebec and Ontario reported as much as a 60% loss of beehives, but Anicet is changing life for Quebec bees by breeding a stronger queen bee. “A stronger queen means a healthy and more resistant colony as a whole,” he says. In fact, queen bees are the heart of every colony. There’s only one in a hive at any given time and she helps regulate the unity of the colony as well as lay eggs for the next season. She’s what the worker honeybees live and work so hard for.

One of the challenges of breeding in Canada, however, is the cold climate and short summers. “The reality is that queen breeding is very complicated in Canada. Summers are short and springs are slow to start. There’s not a lot of time for breeding, which is why the biggest breeders worldwide are mostly in California. The climate there is favorable: spring comes early, so the queen bees have an easier and longer time to grow and develop.”

Anicet checks in on a hive and their queen as his wife and co-owner, Anne-Virginie and daughter enjoy honey, July 2014. Photo by Colombine Drouin. 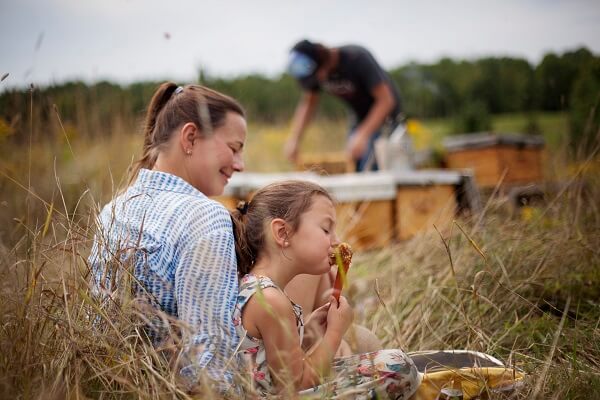 Thankfully, Anicet is creating innovative solutions that will benefit bees and people. In January 2015, Anicet became a SLush Fund partner. The Sustainable Lush (SLush) Fund donates 2% of the amount Lush spends on raw materials and packaging each year to a fund. It’s then used to support projects that aim to regenerate the earth, the land and to help the community thrive. “We feel like Anicet’s breeding project is aligned with our own goal of moving toward regeneration,” says Lush Buyer Yuliya Nakonechna.

Anicet’s breeding center, located in California, allows him to breed queen bees in a warmer climate before the season begins to give them a good, strong start to life. He then travels with them back to Quebec where he helps them continue to thrive and grow with a natural defense system that’s perfect for life in Canada. “To combat some of what’s happening with bees around the world, we need to have a bee that’s local and adapted to our climate. In the past, bees from the Mediterranean, Australia, New Zealand and Chile would come to Canada, but pesticides and local diseases meant that survival was a challenge. We needed to think local.”

Another advantage of the Miels d’Anicet farm is its location. Their organic, eco-friendly farm is 155 miles north of Quebec’s largest city, Montreal. “It’s a place of agroforestry,” explains Anicet. “It gives us an advantage, being out here, because we’re so isolated and there’s no contamination from other producers or pesticides.” This isolation means that Anicet and Anne-Virginie can ensure the best life for their bees throughout the entire year – no pesticides or threat of foreign diseases either.

As the fight to save bees continues around the world, Miels d’Anicet is working to share their knowledge with the global bee community. Anicet believes local bees will always be better adapted to their environment, which could help reduce some of the huge annual bee losses. He also remains optimistic about the fate of his busy little workers. “We’ve gained valuable knowledge in the last 30 years about bees and how we can help them. Now we can go forward with all of our gained expertise and use it to help them get back on track. In the end, we can’t lose.”