Let's be the next country to #BeCrueltyFree

At this very moment in laboratories across the country, animals are suffering in painful toxicity tests for cosmetics.

Terrified rabbits, mice, rats, and guinea pigs have substances forced down their throat, dripped into their eyes, or smeared onto their skin, and are left to suffer for days or weeks without pain relief. Globally, nearly 500,000 animals suffer and die each year just to test cosmetics.

Sadly, this cruel and unnecessary suffering still remains legal in approximately 80 percent of countries worldwide, including Canada. And some countries, such as China, expressly require animal testing for many products.

This is the ugly secret of the beauty industry. But we have the opportunity to make animal testing for cosmetics a thing of the past in Canada.

The #BeCrueltyFree Canada campaign, led by Humane Society International and Animal Alliance of Canada worked closely with Senator Carolyn Stewart Olsen who introduced The Cruelty Free Cosmetics Act in December 2015. The bill is currently under review in the Senate and would bring an end to cosmetic animal testing in Canada, both for products and ingredients, as well as ending the sale of cosmetics and ingredients that have been newly animal tested in other countries.

Since its launch in 2013, the campaign has gained high-profile support from celebrities and companies who want an end to cruel cosmetics. More than 110,000 Canadians and dozens of cruelty-free beauty brands have signed the #BeCrueltyFree Canada petition in support of the Cruelty-free Cosmetics Act.

This legislation would place Canada on an equal footing with 34 (and counting!) progressive countries, including India, Israel and countries of the European Union, which have already turned their backs on cosmetics cruelty. Similar legislation is pending in the United States, Brazil, Taiwan, Australia, Argentina and elsewhere under the leadership of #BeCrueltyFree campaign teams.

#BeCrueltyFree is the largest campaign in history to end cosmetics animal testing and trade globally. Led by HSI in partnership with animal protection partners in more than a dozen countries, the goal is simple – to create a world where no animal has to suffer and die in the name of human vanity. 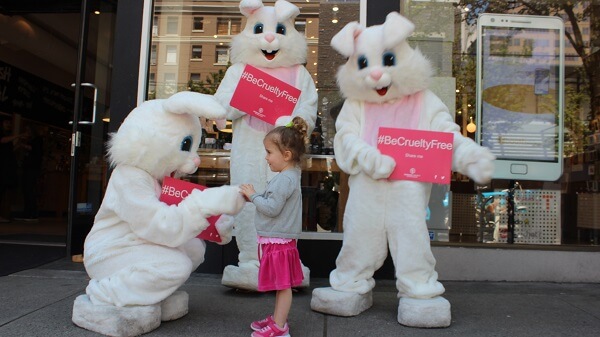 So how can companies produce new cosmetics without animal testing? Safe existing ingredients are the key. Hundreds of companies have sworn off animal testing yet still produce new, safe, and fabulous beauty products the cruelty-free way. That’s because they can choose from thousands of widely available cosmetic ingredients that have already been safety tested. And although it’s not possible to undo animal testing that’s gone on in the past, every company can make a fresh start and make the leap to cruelty-free today.

Additionally, animal tests are increasingly being replaced by quicker, cheaper and more reliable non-animal methods. 3D skin models such as EpiDerm, made from artificial human skin grown in the lab, have been shown to better predict skin irritation in humans than the cruel rabbit test they replace. Proven non-animal methods are also available for eye irritation, skin allergy and more.

Then why, you ask, do companies continue to use animals for cosmetic testing purposes? Animal testing continues in the cosmetics industry largely because of convention – that’s the way it’s always been done; animal tests are the norm, even if they’re flawed. Regulators, whose job it is to approve cosmetics for use, tend to be very conservative in their approach and can delay approving a product if the manufacturer provides safety data based on unfamiliar non-animal test methods. HSI works with companies and regulators around the world to increase understanding and acceptance of modern non-animal test methods.

How can you help Canada to #BeCrueltyFree?

1. Sign HSI’s petition at BeCrueltyFree.ca, which sends a message to your Member of Parliament asking them to vote in favour of the Cruelty-free Cosmetics Act.
2. Get your friends and family to sign and share the petition, too.
3. Money talks, so vote with your wallet by only purchasing products from companies that have turned their backs on animal testing, like Lush or companies certified as cruelty-free by the Leaping Bunny Program
4. Keep up with the campaign on Facebook and Twitter

Together, we can make Canada the next country to #BeCrueltyFree!