Across the world, Indigenous communities are dedicating themselves to protecting the land, ecosystems, and traditional cultures with thousands of years of history.

Ta’ah is preparing a ceremony. She is an Indigenous Elder of the Tsleil-Waututh Nation, in what has been known as Canada for the last 150 years, since it was colonized. Calling on the strength of her ancient ancestors, Ta’ah brushes the six women before her with a cedar branch and purified water. These women make up the Indigenous Climate Action team, and they are meeting with each other face-to-face for the first time in Vancouver. The ceremony marks the beginning of the first meeting of this Indigenous-led climate justice organization, and a way for them to bring their traditional roots into the space.

“This is how we want the water to be,” Ta’ah says, signaling the purified water. Before the ceremony, she spoke of water pollution and the impact industrial activities are having on sacred water bodies. Water ceremonies, canoeing, and swimming are all embedded in the history of the Tsleil-Waututh Nation, but Ta’ah says they now come out of the water covered in red rashes.

Ta’ah suddenly stops, and the color drains from her face. After a pause, she says, “I just saw a really sick whale. He was just lying limp on the beach. We have to speak for them.”

This is a stark reminder of why the world needs Indigenous Climate Action. This Indigenous-led group is speaking up for Mother Nature, and helping to channel Indigenous knowledge and experience into real solutions to protect the planet. Whether it be whales around Vancouver, the water tainted by oil refineries, or the sacred Indigenous land turned over to pipelines and land trains.

Ta’ah, and other Elders we speak to across what is now known as British Columbia, all carry so much pain, from the destruction of their sacred land, to the residential schools that Indigenous children were forced to attend by the government. These boarding schools were designed to wipe out native culture and language, and assimilate children into “Canadian” culture. The Elders we speak to all say they experienced years of torture and abuse: verbal, physical, and sexual.

Ta’ah and her fellow Elders now look to the next generation, like the six women of Indigenous Climate Action. They, she explains, can harness the pain that their parents and grandparents have felt firsthand, but are not so broken as to be powerless. They can do something. 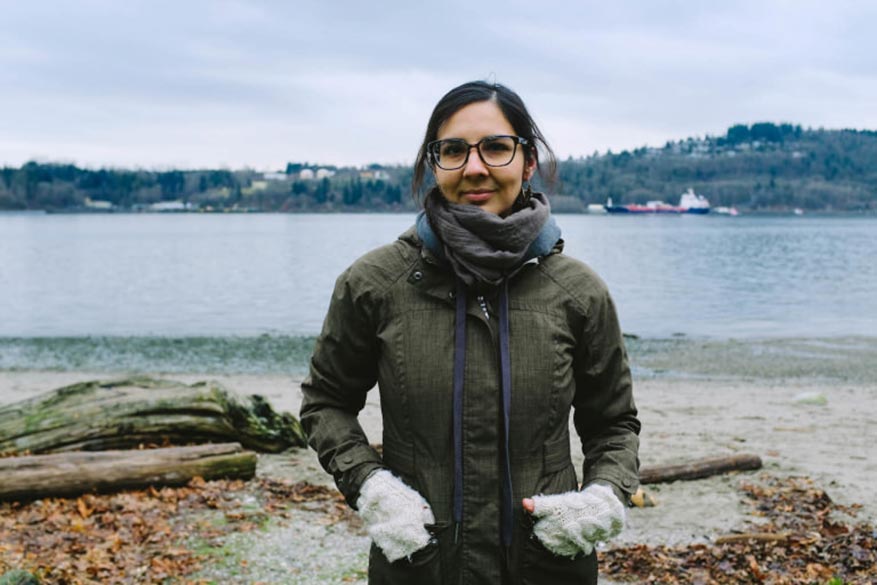 “I am Eriel Tchekwie, and I am Thunder Woman. I carry the sound from the lightning.”

Eriel Tchekwie Deranger, the executive director and founder of Indigenous Climate Action (ICA), has seen her native Athabasca Chipewyan First Nation land face destruction from tar sands, where bitumen is mined to be turned into oil.

These tar sands, Eriel says, are a symptom of a larger problem; Indigenous groups have been marginalized and left out of decision-making.

“It’s so important to empower Indigenous communities. We have been left on the sidelines of so many discussions. In this country we just celebrated 150 years of Canada. For a lot of our communities that means celebrating 150 years of being oppressed,” she says.

For a long time, Eriel resisted the idea of creating an organization and leading staff, but other members of her community persuaded her that she needed to. This Thunder Woman (the translation of her name in her traditional Athabaskan Dene language) is surrounded by five other Indigenous women, all bringing their own strength, history, and knowledge.

Now, Eriel says: “Why am I doing this? Honestly, I don’t feel like I have a choice.”

Indigenous Climate Action is not championing one specific climate change solution. The organization exists to support Indigenous communities across Canada, giving them the capacity to become climate champions and promote the things they are already doing.

“While we’re the first and foremost to be impacted by climate change and the changing ecosystems on the planet, we are actually also the first that are able to build solutions to adapt and be resilient to them, because of our intimate relationships with the lands and the ecosystems,” Eriel says.

The solutions to climate change stem from ancient Indigenous knowledge, and the organization focuses on land defence, and challenging the drivers of climate change. It makes use of Indigenous rights to territories, and uses international rights to empower people to stand in the way of projects which threaten the land. Through this, communities strive to protect both ecosystems and cultural identities.

Eriel and her team are now meeting with Indigenous communities across Canada to find out how they can support them, and work toward building an Indigenous climate change toolkit. The toolkit will connect communities, provide training resources, and amplify discussions about Indigenous rights and climate change.

One group supported by ICA is the Tiny House Warriors, which is providing climate change solutions by standing up against a threat to nature, water, and sacred land. The group is building 10 tiny houses to position along a proposed Trans Mountain Kinder Morgan pipeline route, which would transport crude oil across 322 miles of Secwepemc Territory. The houses are built on wheels for easy maneuverability, and the household equipment inside is powered by solar energy.

Leading the charge is Kanahus Manuel, an Indigenous activist and defender of the land. Her name means ‘Red Woman.’

“This pipeline that is being proposed to come from the Alberta tar sands all the way through our territory, through pristine mountains, glaciers, and rivers, is going to impact our way of life, because we are so connected to the land,” Kanahus says.

She explains that the Tiny Houses have more than one purpose. While the buildings are being used to occupy land targeted for the oil pipeline, they are also homes. They are proof that it is possible to downsize, and take less from the planet.

Kanahus says: “We don’t need to be consumers and capitalists to have a happy and successful life. We can have less of an imprint on the Earth, and show people that we can house ourselves. We can solve some of the issues that we face because of colonization.”

Indigenous people have already tackled environmental issues like recycling and reusing, Kanahus says, because they are not big consumers. For the Tiny House Warriors, standing up to climate change means standing up to Kinder Morgan.

ICA is right behind this group, promoting its cause by helping raise donations, making connections and gaining support for events, while promoting Indigenous leaders like Kanahus as climate solution voices. In the future, ICA is planning to build a whole media strategy around groups like this. Podcasts, webinars, and mini documentaries could help to share the knowledge and efforts of the people who are committing their lives to climate action.

There are countless other groups that ICA is working with right across Canada. It’s already had its first meeting with the Pacific Peoples’ Partnership in Victoria, on British Columbia’s Vancouver Island, to explore ways of working together. This organization is rooted in environmental and social justice, and works with Indigenous communities across the pacific. Next on the agenda, they will be organizing an international climate networking conference, called the Red Tide Summit, alongside the Toitoi Manawa Trust who will host the summit in New Zealand. This will be another step in connecting Indigenous communities.

Eriel says: “Their vision is our vision, and we need to be working with people who are like-minded.”

What the world needs now

Eriel Tchekwie Deranger is standing in the Elders’ lounge in Tsleil-Waututh Nation. She is listening as I interview Ta’ah, the Elder who will bless her at the meeting tomorrow, and will see the sick whale in her vision.

Ta’ah talks to me about her land, her people, and the Kinder Morgan pipeline that is ripping through everything she and her people hold close. Once she finishes speaking, there is a long silence. Both Ta’ah and Eriel weep for the pain they feel for their land and people, and it is so clear that the world needs to change.

Standing on the pebble beach just across the road from where some members of the Tsleil-Waututh live, a bald eagle flies over our heads and lands high up in a tree. The water we stand before is sacred to the Tsleil-Waututh. Their ancestors canoed here, and held their ceremonies in this place. Right across the water, humming relentlessly and pumping smog into the sky, is an oil refinery. Next to this is a Kinder Morgan terminal, which provides the crude oil for the refinery. It is nothing short of sickening – there is no other way to describe it.

Standing on this sacred land, it is all very obvious. Indigenous Climate Action is asking the world to listen, cease destruction, and include Indigenous voices in decision-making. Now is the time to listen and take action.