How we’re navigating the risky business of jojoba

30 years ago, this district was booming with jojoba production. Rows of dense green bushes covered the dusty desert, and farmers harvested the seeds for their oil: a clear golden liquid used widely in cosmetics and pharmaceuticals. But rapidly changing weather patterns have made jojoba a risky investment. After several years of too-cold temperatures, most farmers abandoned their jojoba crops.

Jojoba oil is an excellent moisturizer for the skin. “It’s the closest thing nature can provide to our own sebum,” explains Lush brand and product expert Erica Vega, “because they are such a close match, jojoba is readily accepted into the skin to condition and prevent moisture loss.” So, it’s no surprise that our product inventors choose this silky, nourishing ingredient for skincare inventions like Ultraplant and Skin's Shangri La Moisturizer.

In 2020, our North American Buying team purchased 18 tons of certified organic jojoba oil for use in our fresh handmade cosmetics. When it comes to finding suppliers who can deliver this much jojoba, buyer Jesse Pretty says, “the big challenge is always ensuring we’re engaging like-minded companies who understand and comply with our non-animal testing policy.”

Sourcing any ingredient ethically and transparently is complicated. But jojoba brings its own unique challenges that buyers need to consider.

Native to the southwest United States and northwest Mexico, jojoba crops are sensitive. They require hot, dry conditions most of the year with a few days of near-freezing (but not frosty) temperatures to stimulate flowers out of dormancy. But if temperatures dip too low for too long, the flowers freeze and that year’s crop is spoiled. If the cold snaps last for longer periods, more than a year’s harvest can be affected. And in some cases of extreme cold, the tree may not produce seeds for several years.

Unfortunately, between 2011 and 2013, our suppliers and many other farmers in Arizona experienced just that. After several years of unpredictable weather, their jojoba plants were producing just a few seeds. “We’d been working with them for many, many years,” says Pretty, “and suddenly they said ‘we have no oil for you’.” Apart from this being a difficult situation for the farmers, it highlighted our need to establish suppliers in different regions to ensure a stable supply of jojoba oil into the future.

Jojoba seeds grow on a bush in Peru. 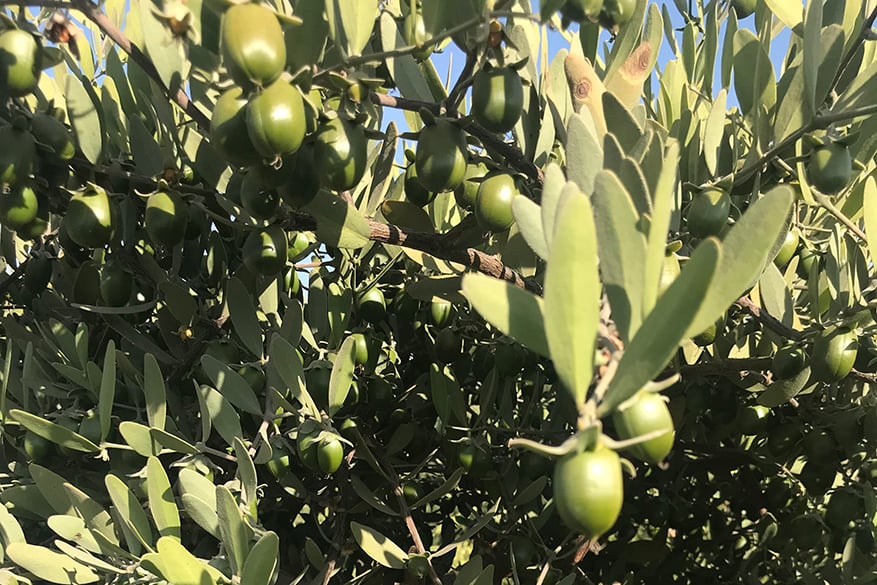 After the large-scale crop failures in Arizona, Pretty was tasked with establishing a new reliable supply of jojoba. Our friends from Lush UK had been purchasing jojoba from a farm in Ica, Peru since 2007. Since our standards of quality and ethics in buying are aligned globally, this was a natural fit for us in North America.

Ica’s unique desert climate sees the farms covered by a light fog every morning which disappears by the afternoon. Temperatures are perfect for the crop, with little risk of frost affecting seed production. Sustainable practices are in place: in addition to only using organic fertilizer, no herbicides, pesticides or fungicides are needed due to the dry climate, and plants are watered using drip irrigation to limit the amount of water used. Pretty says that although he’d love to see more intercropping and an increased focus on water conservation, our Peru supplier is “the reliable source we need to run congruently with our Lush Investments work in Arizona–a region that’s currently much more susceptible to crop failure.”

Lush Investments is a program that aims to build independent and ethical agri-businesses that supply Lush and other markets with 100 percent transparent materials. Gavin Hollett, manager of the Lush Investments team in North America, describes how it works: “We allocate an additional two percent of our annual spend on raw materials, essential oils and packaging and put that into a fund that we use to create future ethical sources of important ingredients”.

Through Lush Investments, we have helped rehabilitate more than 80 acres of old jojoba farms in Arizona and are planning to rehabilitate an additional 120 acres over the next two years. Other blocks of land are being planted with native desert species purely for habitat restoration purposes. The goal is to revitalize the land and produce organic jojoba in an environmentally responsible way, while providing the community with reliable employment. The land is being managed by a small multigenerational family business called Jalisco Jojoba, who’ve worked in agriculture for many decades and in jojoba for the last 30 years. Hollett says in the past, jojoba seeds cost just $1.85 per pound. “We’re paying $3.85 a pound now, on the condition that there’s a move towards less water consumption and greater biodiversity in the jojoba fields and surrounding areas.”

In addition to the jojoba farm, we’ve set up a seed-crushing facility which allows the Jalisco Jojoba family to press their own oil, ensuring more money stays in the community while reducing freight between farms and processing sites.

The future for jojoba

Pretty estimates that 70 percent of the jojoba oil we buy in 2021 will come from the jojoba farm in Arizona, with the remainder from our supplier in Peru. As the project continues to grow, Pretty and Hollett say they’ll be focusing on reducing its water consumption and improving their selective cutting program to ensure the plants are hardy and productive for now and for the future.

As for the abandoned and neglected jojoba fields, Hollett believes they can prosper again. “We hope to one day have more than 500 acres of this district flourishing with jojoba and native plant species; and to engage communities in water conservation and habitat protection to preserve and protect the desert for decades to come.”