Free ground shipping on all orders over $40 until April 30th. | Learn More.

Keep Fossil Fuels in the Ground

Our lives depend on it

Bill McKibben is founder of 350.org, a planet-wide, grassroots climate change movement that has organized thousands of rallies around the world, spearheaded the resistance to the Keystone Pipeline and launched the growing fossil fuel divestment movement. He is also the author of dozens of books including the recent Oil and Honey: The Education of an Unlikely Activist. Follow him on Twitter: @billmckibben

Global warming is actually quite simple, at least if you stay away from politics for a moment. Basically, it’s nothing more than a science problem. We’ve got too much of something—that would be carbon dioxide in the atmosphere. And we’ve got too much because for the last couple of hundred years we’ve been burning huge quantities of coal, oil and gas.

Every time you burn coal or oil or gas you produce co2—lots of it. If you burn a gallon of gas, which weighs about eight pounds, you pour about five pounds of co2 into the atmosphere. You can’t see it or smell it, but it traps heat that would otherwise escape out into space—its molecular structure acting like a blanket, warming up the earth. In one sense, that’s all you need to know.

It’s simple. Not easy, but simple. We have to stop burning fossil fuels, and since we’d still like to use electronics, we need to find another source of power. That’s all there is to it.

Our problem is that there are people who don’t want to switch off the fossil fuels and turn on the sun and the wind, because they make money, lots of it, the old way. These fossil fuel companies have huge stores of coal, oil and gas that they’ve already found. They’re counting on burning them. That’s what they’ve told investors and banks they will do, and they don’t care that scientists have said we must keep 80% of that carbon underground in order to avoid a global warming disaster.

So there’s a fight underway. A big fight. 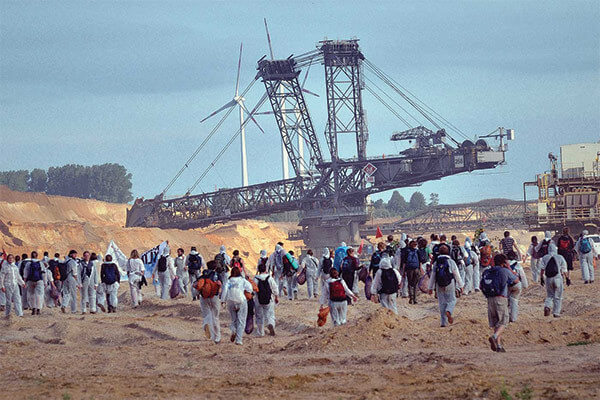 The good guys are—well, not winning, but not losing as badly as they used to. Five years ago “keeping it in the ground” was a new idea. When environmentalists talked about climate policy, it was almost always in terms of reducing demand. On the individual level: change your light bulb. On the government level: put a price on carbon. These are excellent ideas and they’re making slow but steady progress (more slowly in the U.S. than elsewhere, but that’s par for the course). Given enough time, they’d bring down carbon emissions gradually but powerfully.

Time, however, is precisely what we don’t have. 2015 was the hottest year in recorded history, smashing the record set in…2014. 2016 is kicking 2015’s butt—February and March were the two warmest months ever recorded on the planet. So we have to attack this problem from both ends, going after supply as well as demand. We have to leave fossil fuel in the ground.

Most of that coal, oil and gas—most of that money—is concentrated in a few huge pools of carbon underground. There’s oil in the Arctic, and in the tar sands of Canada, Venezuela and the Caspian Sea; there’s coal in western Australia, Indonesia, China and the Powder River Basin; there’s gas to be fracked in eastern Europe. Call these the ‘carbon bombs.’ If they go off—if they’re dug up and burnt—they’ll wreck the planet. Of course, you could also call them ‘money pits.’ Lots of money—that coal, gas and oil may be worth $20 trillion. Maybe more.

It’s why we’re organizing across the planet to defuse these carbon bombs. This May, people from all across the globe are joining in Break Free, which may turn out to be the largest civil disobedience action in history—in 17 nations they’ll be putting their bodies on the line to block new pipelines, ports and rail lines designed to keep the carbon flowing.

This is the same logic behind the Keystone pipeline fight, which turned into the biggest environmental struggle in recent decades in America. Lots of pundits said it was “just one pipeline,” but blocking it meant that the expansion of Canada’s tar sands suddenly slowed sharply. Investors unsure that there would ever be affordable ways to bring more oil to market pulled tens of billions of dollars off the table, even before the price of oil began to fall. So far only about 3% of the oil in those tar sands has been extracted; the bomb is still sitting there, and by blocking pipelines we cut the fuse.

The same tactics are working elsewhere too. In the Pacific Northwest thousands of activists in small boats (‘kayaktivists’) blocked Shell’s drilling rigs headed for the Arctic, eventually helping persuade the oil giant to curb its polar ambitions. In Australia, unrelenting pressure from indigenous groups and climate scientists have so far blocked plans for what would have been the world’s largest coal mine in Queensland’s Galilee Valley. Activists tied up plans long enough that other campaigners were able to pressure banks around the world to withdraw financing from the giant mine. By last spring most of the world’s major financial institutions had vowed not to provide loans for the big dig, and by last summer the mining company was closing down offices and laying off its planning staff.

Money, in fact, is a key part of the Keep it in the Ground strategy. In the fall of 2012, students, faith leaders and other activists launched a fossil fuel divestment campaign in the U.S. that soon spread down under and to Europe. The argument was simple: if Exxon, Chevron, BP and Shell plan to dig up and burn more carbon than the planet can handle, they’re not normal companies. If their business plan would break the planet, then we need to break ties with them.

These divestments are hurting companies directly—coal giant Peabody formally told shareholders that the campaign was affecting its stock price and making it hard to raise capital. They’ve even driven the facts about keeping carbon underground from the fringes into the heart of the world’s establishment. When the Rockefeller family—heirs to the original oil fortune—started divesting their fossil fuel stocks, it was a signal, and one picked up by everyone from Deutsche and World Banks to the International Monetary Fund. A month after the Rockefeller announcement, the governor of the Bank of England told a conference that “the vast majority” of carbon reserves are “unburnable,” warning of massive “stranded assets.” Trying to get out from under this “carbon bubble” is one reason why huge funds are now beginning to divest. The California public retirement funds, for instance, lost $5 billion before they saw the light and started selling their stock.

This May’s Break Free actions are just more of the same—ramping up the pressure. The leaders, as always, will be the frontline communities that live nearby. The rest of us will make the trek to these locations; others will rally at embassies and banks to bring the same point home. Once we’ve marked them on the planet’s mental map as mortal dangers, our odds of winning go up.

If you’re still skeptical, consider what happened in the Amazon in the ‘80s after the world’s scientists identified the rainforest as absolutely necessary to the planet’s survival. Much to the surprise of many, the government of Brazil moved effectively to slow deforestation. Their efforts haven’t been perfectly successful, but they’ve kept those trees above ground, just the way we need to keep that oil below ground. We’ve also got a couple of advantages in this fight the Brazilians didn’t. For one, they were a poor country. Many of the big carbon bombs lie in richer nations, like Canada, the U.S., and Australia; we can afford to let them be.

More importantly, it’s beginning to look like we don’t need to win this fight forever. That’s because alternatives to fossil fuel are becoming cheaper with every passing day. The price of a solar panel has fallen 75 percent in the last six years. That’s a mortal threat to the hydrocarbon tycoons. They know that they have to get new infrastructure in place in the next few years. If they can build those pipelines and mines, then for the next 40 or 50 years they’ll be able to get carbon out cheaply enough to compete (and to wreck the planet). If they can’t—if we can hold them off for just a few more years—then we’ll have made the transition to clean energy irreversible.

I don’t know if we’re going to win this fight in time. The flood of scientific data about the damage that’s already been done unnerves me, but I do know we’re now fighting on every front—and the most important one is the simplest: we can and we must keep coal, gas and oil in the ground.