In the Land of Argan

We travelled to Morocco to discover how our partnership with fair trade argan oil producer Argane Aouzac is helping to support community development and the women of Tazghlilte.

Used by Berber women for centuries to condition the skin and hair, argan oil contains exceptionally high concentrations of vitamin E and oleic acid. Exported exclusively from Morocco, the oil has become increasingly popular in cosmetics in the last decade. Today, the industry supports an estimated 2.2 million people living in rural regions, and the Moroccan government plans to triple annual production by 2020.

As market demand rises, so too does the importance of direct trade— a way to create transparent and respectful partnerships that positively contribute to the social, environmental and economic well-being of producer groups. In practice, it means going beyond a traditional business relationship and making real, human connections with people like Alban Colon de Franciosi, founder of Argane Aouzac.

Alban first fell in love with Tazghlilte ten years ago while visiting a friend. He noticed not only the region’s abundance of argan trees, but also the opportunity to partner with the village to create fair and sustainable employment for women. Alban chose to relocate from France with his son Jean, and together they became the first argan oil producer in the region to be certified organic and fair trade. 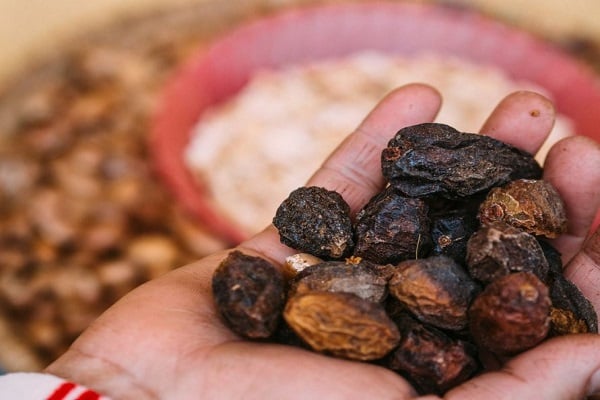 Endemic to Morocco, the argan tree is a highly stabilizing element of the arid ecosystem. Argan forests cover more than 3000 square miles of Morocco, and are so unique that they’ve been designated as a protected UNESCO Biosphere Reserve. Massive leafy canopies protect the small green argan fruits until they ripen and fall to the ground each July.

Argane Aouzac works with more than 450 women from five villages to collect the fallen fruits—complete harvesting impedes regrowth and threatens the health of the trees. The flesh is dried and removed from the small nut inside, which is then hand-cracked to remove the kernel. The kernels are ground into a thick, mealy paste and cold-pressed to extract a rich oil for both cosmetic and culinary purposes.

Cracking argan nuts is a skill passed down through generations. Local women congregate in shaded doorways around the village, chatting and cracking kernels between two stones with lightning precision. Watching the fluid movement of their hands is hypnotic and makes the process appear effortless, but even slightly too much pressure will crush the kernel inside and render it useless. 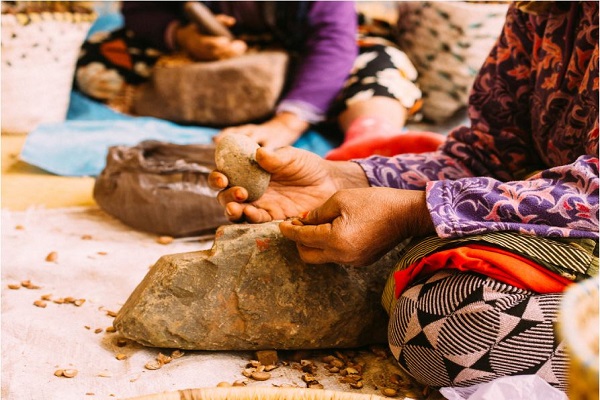 Each week, the women visit Alban to deliver their bags of kernels. They’re paid fair trade prices for their yield, and the money is handed directly to each woman—not their husbands. This is exceptional as Berber society is traditionally patriarchal; however, ongoing issues with food security have forced men to seek work away from their families. As a result, women and children make up more than 80 percent of the population—and the responsibility of maintaining the village has fallen on their shoulders.

The impact of argan oil production is undeniable—each family now owns livestock, has access to clean drinking water, power lines and a garbage collection system. Inside the newly built arts and crafts center, teenage girls learn skills such as carpet weaving, embroidery and spinning. But perhaps most notably, the women of Tazghlilte have achieved a level of autonomy and influence since becoming co-providers to their households.

By working with producers like Argane Aouzac, we can see first-hand how our ingredients are grown and produced, form genuine relationships with our partners, and gain insight into the true environmental, social and economic impact of our purchase. We believe it’s our responsibility to use argan oil from a sustainable, transparent source in our products, so you can feel good about using them—inside and out.