Nope, this isn’t a brand-new industry buzzword. Naked shower gels work exactly the same way as their liquid counterparts without the need for packaging.

At first glance, they might look the same as some of the soaps you’ve grown to love over the years but naked shower gels don’t contain any soap base, they instead share most of the same ingredients as liquid shower gel.

“Why make it naked?”

Creating a naked product not only saves on packaging, it also makes shower gels easier to use and more convenient to travel with. No liquid allowances to worry about and less wasted product down your drainpipe.

In 2016, we sold more than 5 million bottles of shower gel. If just half the customers who purchased these bottles switched to naked shower gels, we could’ve saved approximately 2.6 million bottles from ending up in landfill. That's something worth getting naked for.

“Still sounds like soap to me. What ingredients make it different?”

Soap can be made using a variety of different ingredients as a soap base. You’ll find a mixture of rapeseed and coconut oil in the majority of Lush soaps as well as argan oil and olive oil in our gourmet soap range.

Lather up for a whole new experience in the shower 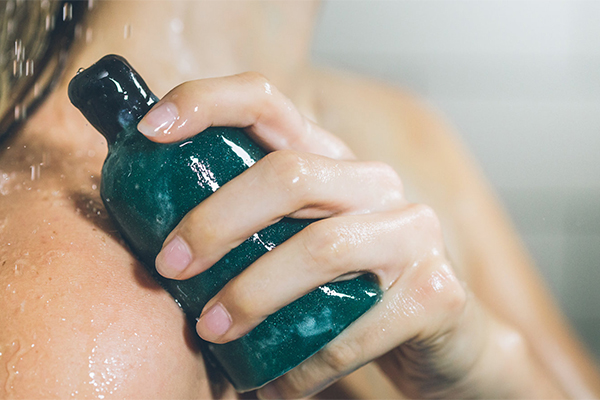 Naked shower gels aren’t made using a soap base. In fact, they contain most of the same ingredients as their packaged versions.

Sodium stearate is what turns our shower gels into solid creations. We use it in our naked deodorants, which helps to thicken and harden the mix, eliminating the need for packaging. Propylene glycol is also added to our naked shower gel formula—this is a humectant that helps attract and retain moisture in the skin. It also reduces bacteria growth, making our naked shower gels entirely self-preserving.

“Is it going to work the same as my regular shower gel?”

You bet! Naked shower gels give you the same powerful fragrance and lathering experience that you’re used to from your packaged products.

They last just as long as your packaged shower gel but there’s no bottle to deal with. Wave goodbye to unnecessary fumbling in the shower and no longer accidentally squeezing too much of your favorite shower gel into your hand or pouf.

Once you've lathered up and are feeling clean and refreshed, place it somewhere to dry, so it’s ready for you to use next time.

So, whether you’re taking a trip around the world and want something you can throw in your carry-on bag or you want to try something new to spice up your routine, the choice to go naked has never been easier.

Want to learn more about how to go naked? Visit your local Lush shop or give our customer care team a call to get all the info you need to get started!