The women of Bongo Soe, in Bolgatanga, Ghana, expertly whip and knead large pans of liquor. The raw, enigmatic scent of Earth rises from them, hinting at what the molten contents will become.

The Fare-Fare people are traditionally subsistence farmers—growing crops to sustain their families rather than to sell. They work small plots of land throughout the wet season and save food for the dry season—known locally as “the hungry season” due to arid conditions and low crop yields. In this season, scarcity of work and food often forced many women to leave their community behind to seek employment elsewhere.

Welcome change arrived in the form of the Ojoba Women’s Shea Cooperative, which took advantage of the karite trees that grow wildly in the local environment. The women themselves brought skillsets passed down through generations, including their traditional method of processing shea butter by hand.

First, they collect, sort and wash the nuts, picking out any blackened ones that could compromise the quality of the butter. The good nuts are then removed from their fleshy pods and boiled before being dried under the intense heat of the African sun.

After being scrubbed clean and dried again, the nuts are fed through a simple crushing machine so only a chunky crumb remains. This crumb exposes the inner flesh, which is roasted over a smoky, open fire until it becomes almost praline-like.

At this stage, it’s pressed mechanically into a liquor that resembles melted chocolate, before being whipped by hand using rhythmic, sweeping motions to form a dense layer of shea butter on top.

The women of the Ojoba Cooperative 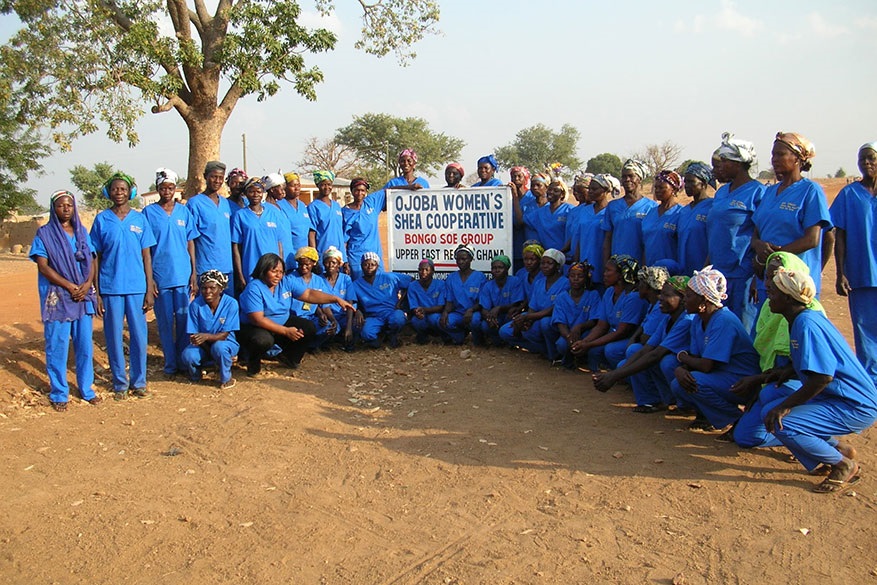 The power of women

The 400-member cooperative provides the women with a reliable source of income all year round. This means they can now stay in their community throughout the seasons, rather than leaving their families behind to seek work.

Now, they can offer material as well as emotional assistance to their families, and can afford school fees and child health insurance. Through a microfinance scheme, cooperative members also have the opportunity to borrow funds to set up their own businesses.

As self-improvement and ambition flourishes, the group continues to succeed, and introduce new, regenerative ventures. Recently the women celebrated the opening of their new community library— the first rural library in the Upper East Region district.

“I always feel happy and strong when I’m with my women,’ says senior cooperative member Atanpoka Abongo. “Sometimes I’ll have a problem at home that I think is too difficult, but when we’re sharing ideas I realize that I can handle it. They encourage me to face anything.”

With thanks to Paulo Mellett