Jennifer Sime of the International Rescue Committee (IRC) tells the story behind the growing refugee crisis and what we can all do to help.

Imagine you have to flee your home. You have to go now. No time to think. Although leaving everything behind is the hardest and scariest thing you have ever had to do, you have no choice. You must leave to save your life and the lives of your children.

This heart-wrenching scenario is all too real for more than one million women, men and children from Syria and other war-torn countries who have made harrowing sea journeys to Europe over the past year. Clinging to hopes of safety and the chance for a better life, they pay smugglers to board overcrowded and unseaworthy rubber boats. Those who survive arrive on European shores weak and dehydrated, physically and emotionally exhausted, and filled with uncertainty about the future. Many, sadly, don’t arrive at all. It’s estimated that nearly 3,000 people died attempting sea crossings in 2015 alone.

Worldwide, there are now some 60 million people—the greatest number ever recorded by the U.N. Refugee Agency (UNHCR)—who have been displaced from their homes due to violent conflict or persecution. That’s one in every 122 people on our planet. The horrific civil war in Syria, entering its sixth year, is the most significant contributor to this shocking statistic. Hundreds of thousands of innocent Syrians have been killed, and many more have been victimized and terrorized by the violence —but there is no end in sight to the fighting among multiple factions.

Since the conflict in Syria began in 2011, more than 11 million people—roughly half the country’s population—have been forcibly displaced. Hospitals and schools have been destroyed, and civilians are deliberately and wantonly targeted. Humanitarian needs inside the country continue to grow: at least five million people now lack adequate access to food, water and medicine.

The deplorable conditions inside Syria have led, thus far, to the exodus of nearly five million Syrians to other countries. Syria’s closest neighbors—including Turkey, Iraq, Jordan and Lebanon—have taken in the vast majority (95 percent) of Syrian refugees to date.

Yet life for refugees in regional host countries is far from ideal. Unable to work legally, many live in poverty. Most lack access to basic services, like health care and education, and must rely on humanitarian assistance to survive. And in the absence of sufficient support from the international community, Syria’s neighbors are buckling under the strain.

Refugees wait for the ferry to Athens to continue their journey into Europe. October 2015 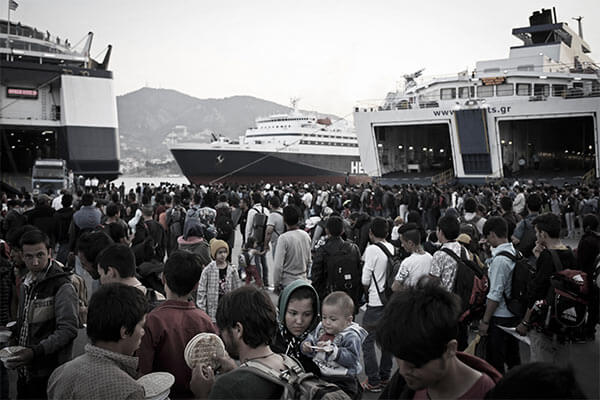 Resettlement to a country such as the United States, Canada or a European nation is often the best, most sustainable solution, for those who are eligible. Resettled refugees are provided permanent residence status and can access many of the same civil, political, economic, social and cultural rights that are enjoyed by nationals. They also have the opportunity to become naturalized citizens.

Despite the obvious benefits of resettlement in the United States, only about 2,500 Syrian refugees have been resettled here since 2011. The U.S. has pledged to take in 10,000 refugees over the next year, but this is simply not enough. By contrast, Germany has committed to accepting 800,000. With the Syrian conflict showing no signs of stopping, the U.S. must uphold its historic role as a leader in refugee resettlement and welcome larger numbers of the most vulnerable Syrian refugees to safety.

In the wake of appalling terrorist attacks in Paris, Beirut, and Sinai in November 2015, some elected officials, citing unfounded fears that terrorists may infiltrate the refugee resettlement program, are calling for a halt to their arrival or cuts to funding for refugee assistance. But refugees are the victims of terror and violence, not the perpetrators. They are people just like you and me who, through no fault of their own, have been forced to seek safety in another country. The recent attacks should not become an excuse to undermine the rights of refugees in international law.

Short of swimming the Atlantic, obtaining refugee status through the resettlement program is by far the most difficult way to enter the U.S. All those seeking to come to the U.S. as refugees must first be registered and screened by the UN Refugee Agency, which identifies the families most in need. Each applicant is then thoroughly vetted and scrutinized by the U.S. through extensive security screenings involving numerous federal agencies, a series of rigorous interviews, and biometric and investigatory background checks. The process typically takes 18 to 24 months.

And refugee resettlement is a North American success story. From Albert Einstein to Madeleine Albright and Sergey Brin, refugees have made profound contributions to our countries. The evidence shows that with the right combination of support and services, we can foster generations of productive and patriotic citizens. The International Rescue Committee (IRC) does just that by providing cultural orientation, English classes, employment assistance, education, and the prospect of a path to citizenship. Each year we help some 10,000 refugees and asylees from around the world rebuild their lives and integrate into their new communities in 26 U.S. cities.

To help put a human face on this crisis and on the success of refugee resettlement, I would like to share a story. In Syria, Ali and his wife Aaminah were the proud parents of five daughters and owned a thriving retail furniture business. But when their newborn son was killed in a rocket attack, they knew they had to flee their home in order to survive. At first, the family went to Lebanon. Though Ali found work and received a small sum of monthly assistance from UNHCR, it wasn’t enough to cover his family’s basic needs. He resorted to selling their food vouchers to pay the rent. When the family was offered the opportunity to apply for refugee status in a third country, they jumped at the chance. After a painstaking 18-month application process, they boarded a plane for Baltimore, Maryland.

With the support of IRC staff and volunteers, acceptance from the Baltimore community, and their newfound rights as refugees, Ali and his family are thriving in America. “I now have a good job, our children are doing great in school, and I can help other Syrian families to adjust and settle here,” says Ali.

Refugee families like Ali’s, who have endured such trauma and hardship, deserve the chance to rebuild their lives in safety and dignity. At the heart of the Syrian refugee crisis—and many other crises that don’t make the headlines— are human beings in danger who seek only a safe haven and compassionate help.

You can help make refugees welcome. Support the IRC’s work. Contact Congress and urge them to stand for welcome. Educate your community. Make your voice heard.