We Are All Related

Working together to fight fossil fuels

Author Pennie Opal Plant is of Yaqui, Mexican, English, Choctaw, Cherokee and European ancestry. She’s been an activist for over 30 years on anti-nuclear, environmental and indigenous rights, and has been a lecturer with the Community Environmental Legal Defense Fund. Pennie is also a founding member of Idle No More San Francisco Bay, is involved in promoting the Declaration on the Rights of Mother Earth, and founded Gathering Tribes in 1991.

As I write this, I’ve just returned from seeing my niece’s newborn baby girl. As I gazed into her eyes, I said a silent prayer hoping we can find a way to shift the systems of government and business that have allowed the sacred system of life to become so out of balance that everything is now threatened. I also prayed that when she’s an adult that she’d live in a world that’s healthy, sustainable, vibrantly beautiful…and in balance.

“We are all related.” No doubt you’ve heard this phrase before, especially if you have friends who are Indigenous to North America. It has many meanings to many people, but ultimately it means that all of life on Mother Earth’s belly is related or connected. After more than 500 years of Indigenous People of the Americas sharing this information, it’s finally been proven. It’s past time for the western world to listen to the Indigenous People who are traditional and doing their best to live within the Original Instructions, guidelines given to people at the beginning of time, which dictate how to live in balance with our relations and the intelligent forces of nature. It would be a shame for humans to continue to violate these instructions to such an extent that life, as we know it can no longer be supported.

Indigenous Women of the Americas Treaty signing on occupied Lenape Territory in New York on September 27, 2015. Photo by Emily Arasim. 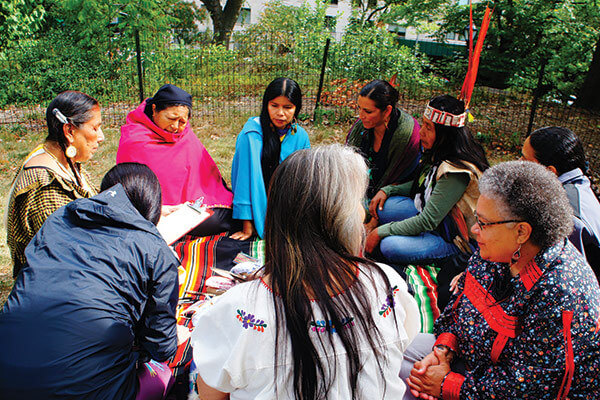 Indigenous people have been on the frontlines of sacrifice zones created by the fossil fuel industry around the world for many years. Indigenous people in the Arctic have been fighting to keep extraction out of their territories. They’re currently dealing with the effects of climate change that include the permafrost melting and releasing methane—one of the worst greenhouse gasses that adds to the climate crisis.

In Alberta, Canada First Nations people are suffering the nightmare of tar sands extraction that has poisoned the air, water and soil, as well as the families and animals that live there. Many Cree families in Alberta are also subsistence hunters and gatherers. Imagine hunting a caribou for your family’s meal, only to cut it open to find tumors, strange parasites, or the meat has an odd color.

In North Dakota, the Arikara/Mandan/Hidatsa Nations have had to deal with similar issues due to the fracking of Bakken oil. Some families are forced to buy bottled water simply to bathe their children because the tap water is so contaminated, it causes rashes and other skin ailments. One can only imagine what it’s doing to the insides of their bodies, and all because corporations and governments collude in keeping vital information about toxins away from the public. They refer to it as “proprietary information”, so their corporate secrets cannot be shared.

In Louisiana, the United Houma Nation is still dealing with the BP disaster. Toxic dispersants used after the disaster as well as ongoing oil extraction, continued Federal oil lease auctions in the Gulf and refineries continue to threaten the health and livelihood of the people who live there.

In British Columbia the Unist’ot’en have built a camp with traditional structures along proposed pipeline routes and evicted oil surveyors from their territory that was never ceded nor a treaty signed with the government. Indigenous people and our allies are resisting many pipelines across the country including the Dakota Access and Sandpiper pipelines. These pipelines are like poison veins that the fossil fuel corporations want to build to get every last cent out of Mother Earth’s belly. It is our job to make sure that doesn’t happen.

Unfortunately, the list is long, the harms are devastating and the battles, while nonviolent, are fierce. Fortunately, we’re here. The Defenders and Protectors of the sacred system of life are everywhere. Women who have never thought about speaking out, going to a demonstration or public hearing are raising their voices. We’re doing it out of love: love for our children, grandchildren and their grandchildren, as well as the places that we love, the spirits of the water, the earth and the air. We’re doing it because we are in love with Mother Earth.

In December 2015, many Indigenous people from around the world were invited to the United Nations Climate Talks, COP21 in Paris. I was among those fortunate to attend as a member of the Indigenous Environmental Network delegation. Our demands were clear:

My focus in Paris was on the Indigenous Women of the Americas – Defending Mother Earth Treaty Compact, 2015 and REDD: Reducing Emissions from Deforestation and Forest Degradation, a carbon trading scheme which California is considering opting in as part of its climate plan.

Carbon trading is works within capitalism to quantify the amount of greenhouse gasses (GHGs) that can be sequestered or purified. Polluters purchase “carbon offsets” of a forest, area of agriculture or other areas that naturally sequester GHGs in the soil or clean the air. 150 years ago, Chief Seattle asked, “How can one sell the air?” Sadly, corporatists and politicians have figured out how to do just that. It allows the fossil fuel industry to purchase carbon offsets from other parts of the world while continuing to emit GHGs where they exist, allowing the devastating health effects to be thrust upon anyone living near extraction sites, pipelines, or refineries.

REDD takes carbon trading into Indigenous communities whose forests still exist because Indigenous people have fought to remain and live in balance in natural systems. Where Indigenous people have been eliminated from their lands due to genocide or forced relocation, the forests have been mostly demolished. REDD offers financial incentives to those whose traditional areas have suddenly been found to have value within this scheme. Sound good? Well, no. There are already documented cases where the Indigenous people have been evicted from their lands in order for the government to receive financial gain. In one very sad case in Nigeria, an 8 year-old boy was killed during the eviction of his tribe. If it feels familiar, it should; this is the modern version of colonization and we have to stop it.

It’s important to understand that there are solutions to our serious problems. In fact, there are millions of people working on solutions, including Movement Rights which assists communities in the United States to pass local laws restricting corporate rights and embedding the Rights of Mother Earth into local law. It helps communities take back their decision-making authority over what happens where they live. 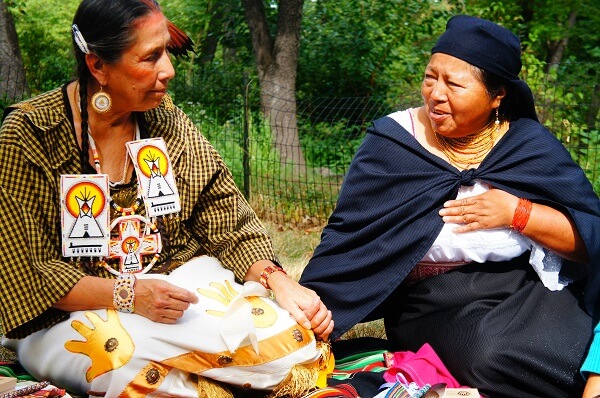 Another solution is the Indigenous Women of the Americas Defending Mother Earth Treaty, 2015. This historic treaty was signed on September 27, 2015 on occupied Lenape territory in New York by Indigenous women of North and South America. There has never been a treaty between Indigenous women making this beautiful document a first. It lays out the harms that are occurring, our responsibilities as Indigenous women, what our commitments are, and what our obligations are to life continuing in a healthy way.

Those alive on Mother Earth’s belly right now have a profound responsibility that no generation has had before. It’s up to what and us we do that will determine whether or not life as we know it continues. We are strong, we are many, and we are unstoppable because we must be.

This May, we’re rising up all over the world and we come in every skin color, age, socio-economic level, tradition and religion imaginable. We are Mother Earth’s immune response and we’re activating in greater numbers every single day. We may make it through the eye of this needle of devastation that we’re currently experiencing and if we do, it will be a much different future. It has to be to be in order to survive.

It's time to demand action from global leaders. Sign the petition now!