Since day one, Lush has been against animal testing.

For years, our efforts were focused on upholding our own strict anti-animal testing policy and leading by example in an industry where cruel animal tests were the norm. But every year that passes without alternatives to animal testing, another estimated 115 million animals are used in experiments worldwide.

So, in 2012, after decades of frustration at the slow pace of advancements of non-animal testing methods, the Lush founders decided to take matters into their own hands and created The Lush Prize.

The Lush Prize is the biggest prize fund in the non-animal testing sector, awarding between £250,000 and £350,000 (approximately $320,000 to $450,000 USD) annually. The winners come from around the world and although they range from scientists to educators, they all have one thing in common: they’re working to eliminate animal experiments entirely.

5 Researchers from North America celebrate their win in 2016 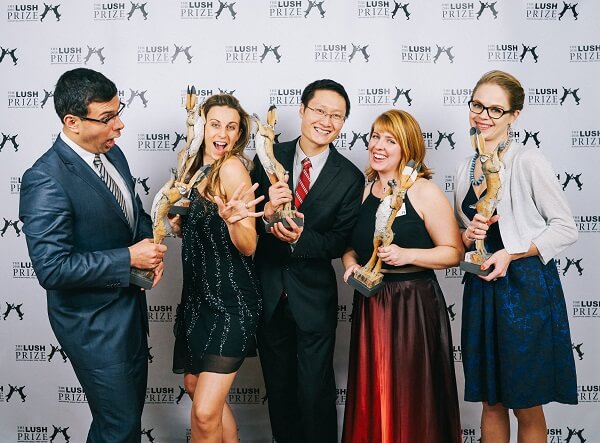 One example of the type of work the Lush Prize supports is the American-based Beagle Freedom Project. Winners in 2015, they were awarded £20,000 for their work in public awareness. Their Identity Campaign highlighted the suffering of dogs and cats in taxpayer-funded labs in the United States by allowing members of the public to symbolically adopt a lab animal. They also provided the adopter the tools necessary to file for public records requests about the animal, and lobby for its release.

In 2017, Professor Jennifer Lewis of Harvard University was awarded £50,000 for her lab’s work in the science sector. Professor Lewis’ team has developed synthetic human tissues that can be used for drug safety testing, effectively eliminating the need for animals to be used for these tests. Their human kidney and heart models are currently being used for drug safety tests, and their work has been highlighted as one of the top 10 breakthrough technologies by MIT Technology Review.

It’s the goal of the Lush Prize to replace animal testing entirely. By supporting scientific advances, lobbying and public awareness efforts and the development of new, modern teaching methods, the prize will help bring forward the day when animals are no long required for testing.

There are many ways to get involved in ending animal testing, even if you’re not a scientist or activist! Visit the Lush Prize website to learn about the program, how to nominate someone for the prize and how to become a customer judge. Of course, supporting cruelty-free brands with your purchasing power means investing in a future without animal testing too—every little bit helps in the fight to end animal testing.