Who’s Looking Out for Bees?

For centuries, honey has been a go-to natural sweetener and skincare ingredient. It adds a sweet, soothing and ultra-moisturizing touch—and we have bees to thank for it. In fact, for every three bites of food you take, you can thank bees for one. It’s estimated that bees pollinate about a third of the food we eat including fruits, vegetables and nuts. In recent years, however, the world was abuzz with news about mysteriously disappearing colonies—and several factors, including pesticides, may be to blame.

“A Pennsylvanian commercial beekeeper named Dave Hackenberg is widely credited as identifying the losses of his honeybees in 2006,” says Paul Towers. He’s the Organizing Director and Policy Advocate with the Pesticide Action Network (PAN) in California; an organization that works with farmers, farmworkers and rural communities to find solutions to the pesticide problem.

Bee hives sit quietly in the sun as honeybees work inside

After Hackenberg’s discovery, PAN began to dig deeper into bee disappearances by working with farmers to learn more about pesticides and their impact on bees. A few years later, they identified that pesticide exposure, on top of existing stresses like habitat loss, lack of healthy food to eat, and the spread of new diseases, was driving bee population declines.

Many pesticides harm insects, but a new class of insecticides called neonicotinoids (or neonics) became the focus for scientists. Introduced in the ‘90s, neonics quickly became widespread, because instead of spraying pesticides into the air to cover a crop, neonics could be applied near a plant or directly onto a seed, where they’re taken up through the plant as it grows. “I think when they came up with this, they thought it was a really wonderful invention that would reduce toxicity,” says Kim Perrotta, Executive Director of the Canadian Association of Physicians for the Environment (CAPE). “But what that means is that the pesticide is actually in every single part of the plant, including the pollen and nectar.” Studies show that ingestion of these insecticides might not only kill bees outright, but they can also hamper their navigation, communication with other bees and, ultimately, affect honey production.

A World Without Bees

“Without pollinators, we’d be able to eat but it wouldn’t be very enjoyable,” says Towers. As bees, butterflies and other insect pollinators face extinction, many of the foods that rely on them would slowly disappear too. Perrotta explains, “If we were to kill of all the pollinators in the world, it would reduce food supply by 23 percent, and it would reduce vegetables by 16 percent, nuts and seeds by 22 percent. We sometimes forget that we need the natural world to provide these invisible services.”

Plant organic, bee-friendly plants right in your own garden 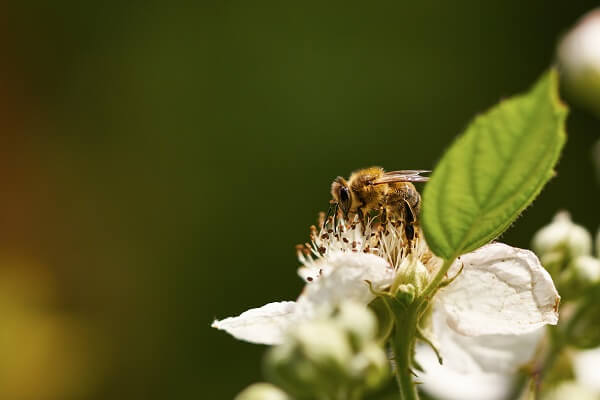 Health Canada, a department of the Canadian government responsible for the nation’s public health, is currently proposing a three-year phase-out of one neonic pesticide: imidacloprid. Their proposal highlights “unacceptably high” levels seeping into waterways, putting insects, animals and humans at risk. In the province of Ontario, they’ve already banned the use and sale of lawn and garden pesticides for cosmetic purposes, but there’s still work to be done. Perrotta states, “Quebec is moving forward to ban even more than what Ontario did, making it the new bar that we should all follow.”

In 2013, the Saving America’s Pollinators Act was introduced into U.S. Congress, which asks that neonicotinoids be suspended until a further review of their impact. It’s still being debated, which has a few states enacting their own legislations to help keep insect pollinators safe and protected. “Pesticide corporations are very powerful,” says Towers. “They wield tremendous influence with regulatory agencies and with congress and state legislatures…and [they] can make it difficult for policymakers and the public to overcome the confusion and misdirection as they attempt to keep all attention away from the harms of their products.”

How Can We Help?

Perrotta and Towers both believe that people young and old are powerful. They suggest pushing for butterfly and bee-friendly gardens at school or at home, insisting on organic food and flowers, and demonstrating to elected officials that it’s time to act. And not just for now, but for the future of all of us. Towers states, “As a father of two young children, I remain focused on leaving them a better world.”