When she entered the toxicology field, which has historically used animal testing, she did so with a strong desire to reduce animal suffering. Marigliani’s since committed her career to developing alternative testing methods that don’t require the use of animals. In fact, if she and her peers are successful in replacing animal testing with other research methods in toxicology, she’ll eventually move to another area where she hopes to have a positive impact. “When we no longer use animals in this field, I’ll probably choose another where animals are used, and work on that replacement,” she said. Marigliani‘s commitment to developing animal-free tests is admirable, especially since many compassionate young researchers don’t enter toxicology because of its exploitation of animals. Unfortunately, those who do choose this career path find access to funding a real challenge.

Brazil-based Marigliani was a recipient of Lush UK’s 2015 Young Researcher Award. The £10,000 prize allowed her to continue her postgraduate studies—a project that aims to replace the use of fetal bovine serum (FBS) in allergy testing. Each year, nearly two million pregnant cows are slaughtered to obtain FBS from the fetuses—an inhumane method that requires a cardiac puncture to the fetus without the use of anesthesia. Marigliani’s research seeks to use a synthetic material for allergy testing that would completely eliminate the need for fetal bovine serum. Not only is the synthetic material an ethical solution, it’s also less prone to contamination.

The Young Researcher Award aims to support and encourage young scientists like Marigliani to develop careers in toxicology without harming animals.

Marigliani accepting her award at the 2015 Lush Prize ceremony 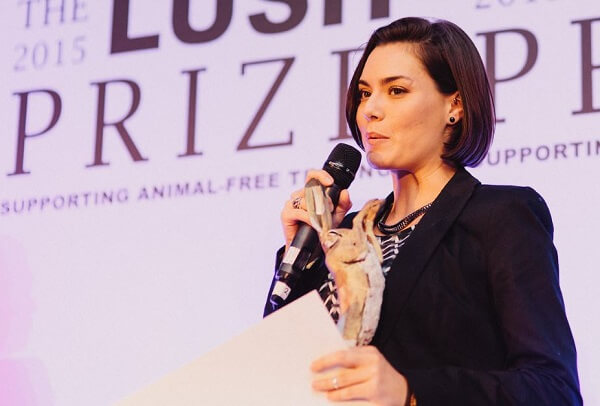 For Lush Prize spokesperson Craig Redmond, the Young Researcher Award is crucial to the advancement of animal-free science. “In some parts of the world, scientists do not always have the support of their universities in avoiding animal use, or they don’t have the same access to technologies, knowledge or resources,” Redmond says. “By increasing our outreach in areas like South and Central America, and across Asia, we hope to raise knowledge and support for animal-free science as well as provide encouragement to those researchers using non-animal methods.”

Redmond’s words ring true for Marigliani. She’s found procuring funding and support for her non-animal research a challenge. “Unfortunately, there are few resources available to scientists working on animal-free tests, especially in developing countries,” she says. “Sometimes, even when researchers are devoted to alternative methods and have great ideas, there are no funds to develop the project, or it’s not considered a priority. We still meet resistance from those who believe the animal model is indispensable and irreplaceable.”

In addition to funding her research, the Lush Prize has provided Marigliani with invaluable networking opportunities and a platform for raising awareness of non-animal testing methods. In a field where alternatives to animal testing are not considered a priority, she says it’s fantastic to feel like she’s heading in the right direction. She plans to continue working on the development, validation and implementation of animal replacement methods. “There’s still plenty of work to be done,” she said. “Being part of the change I want to see in the world is a gratifying privilege.”

To learn more about the Lush Prize or to meet past winners, visit lushprize.org.