These organizations build community alternatives to end harm and violence, empower Black people to exercise their right to vote, protect and defend the health and human rights of Black trans people and ensure that Black-youth activists and organizers have a voice.

We were privileged to be able to virtually sit down with The Marsha P. Johnson Institute to discuss the specific issues faced by the Black trans community in the United States today.

The Institute was founded in 2019 in response to the murders of Black trans women and trans women of color, and how these acts of violence are connected to their exclusion from social justice issues—namely racial, gender and reproductive justice, as well as gun violence. The organization is named after the activist, self-identified drag queen, performer and survivor, Marsha P. Johnson.

Who was Marsha P. Johnson?

Marsha was a prominent figure in the Stonewall uprising of 1969 and, until now, so much of our understanding of who she was came from accounts by people who did not look like or come from the same place as her. As transness—being transgender—is now more accessible to the world, introducing the Institute to Black trans people who are resisting, grappling with survival and looking for community has become a clear need.

What is the Institute’s mission?

The Institute aims to protect and defend the rights of Black transgender people through organizing, advocating and creating an international community to heal, develop transformative leadership and promote collective Black trans power with Black trans people and those committed to undoing white supremacy in all of its forms. The work also seeks to reclaim Marsha P. Johnson and their relationship as Black trans people to her life and legacy.

The MPJI fights to protect and defend the rights of Black transgender people, and to reclaim the legacy of Marsha P. Johnson. 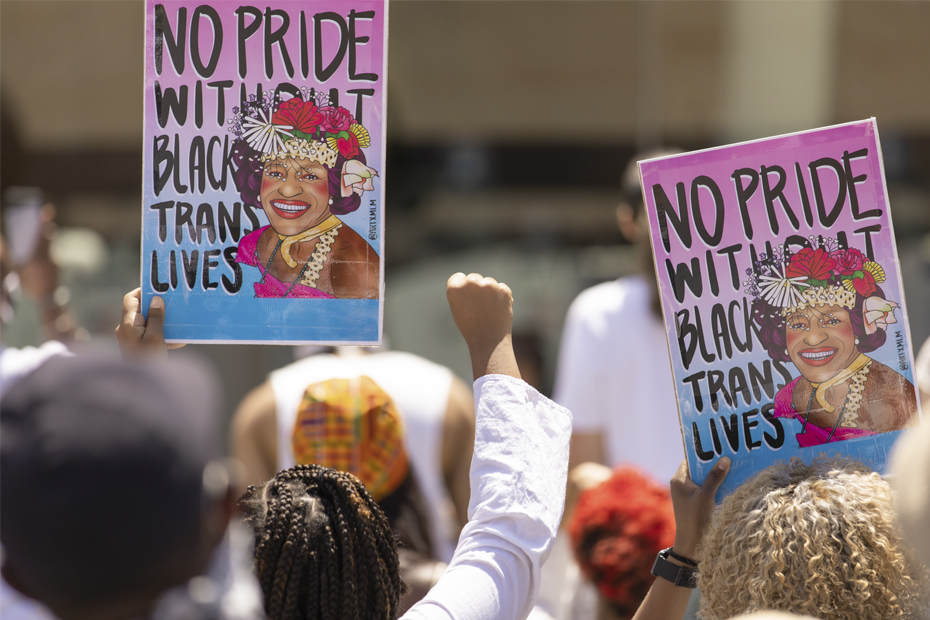 Here was what Elle Hearns from the MPJI had to say about the current state of violence faced by Black trans people and how the Institute helps:

Anti-blackness, transphobia and structural violence are a devastating combination.

Black trans people face some of the highest levels of discrimination of all trans people. In the past five years, the murders and other violent acts committed against Black trans people have gone from often unnoticed and unacknowledged to part of the mainstream, thanks to our advocacy and that of others.

The Marsha P. Johnson Institute is working to create more dialogue, community building and opportunities through political engagement around proposed legislation like The Marsha P. Johnson Safety and Wellness Act—which we hope will be a model adopted at the local level to improve the lives of Black trans people.

Fellowships supplement the incomes of trans artists and ease the burden of transphobia experienced in artistic spaces and provide an opportunity to train new organizers in the South and the Midwest. Our work involves caring for the individual and the community as whole. Recently, we’ve focused our efforts on Covid-19 relief. We raised enough money to provide 100 Black trans people with $500 to help them with basic needs.

Today’s heightened awareness and collective outrage over recent instances of violence is hopeful, however it is important to drive home that the point of entry for creating solutions has to be not when someone is killed, but when other acts of violence are happening to people, such as lack of housing, jobs and healthcare. There are structural circumstances that fuel these issues. It is important for people to know what violence has taken place to our people before they are murdered, not only after. There are myriad brutal experiences that have happened before. That is where true interruption happens.

Continue to redistribute resources and provide space for a multitude of experiences to be reflected back to the world. Make sure that resources and money are allocated to ensure Black trans people can have their needs met. Visit our website to learn more and to donate.